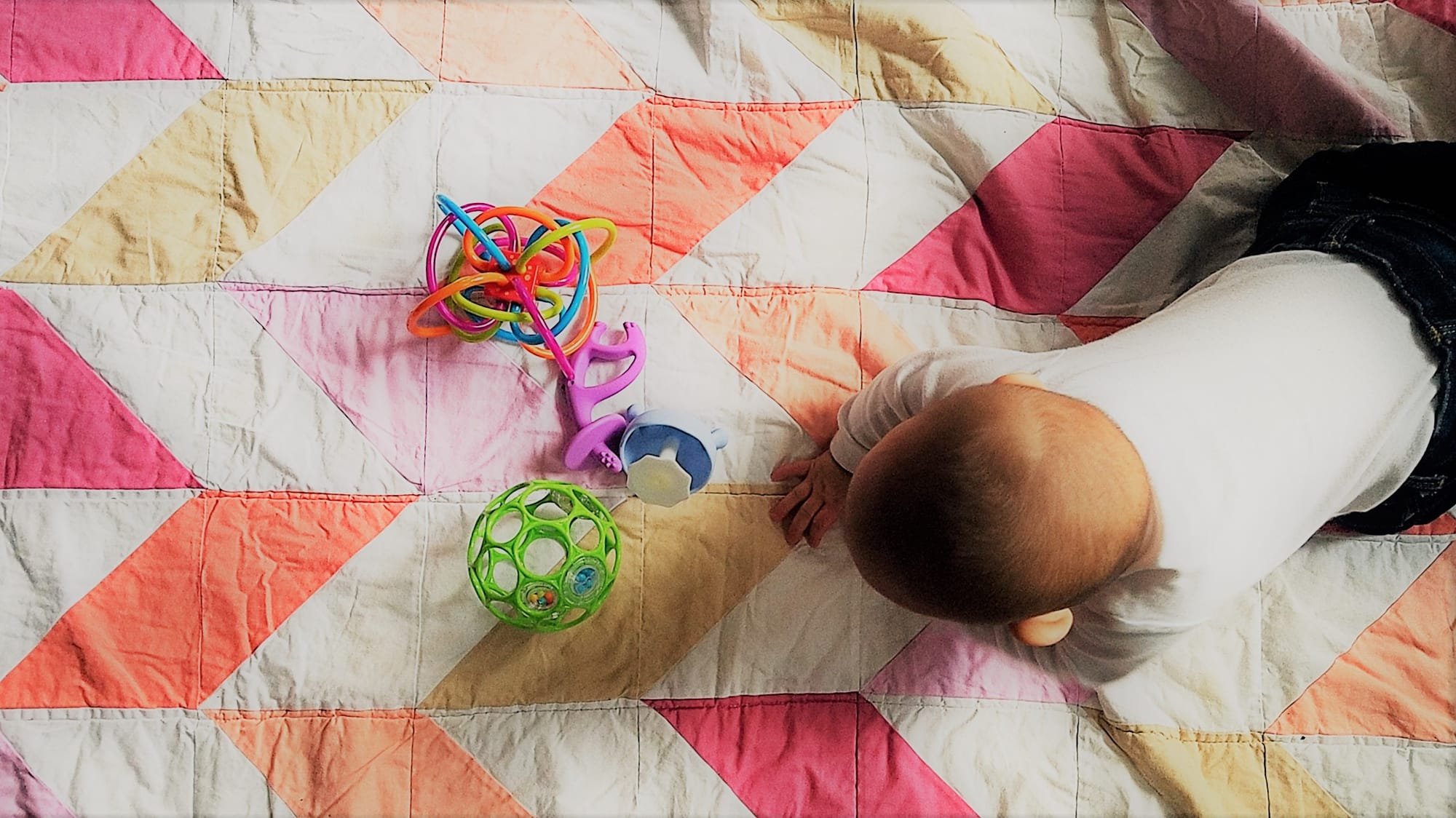 I’ve solicited suggestions from some of my online villages (meaning Facebook mom’s groups) to come up with a solid list of favorite teething toys for a baby’s first year. Initially, this was going to be a general toy recommendation list, but I discovered that most of the toys we’ve all loved in the first six months were teething related! I decided to make a post specific to teething toys, then I’ll come back to make another post on toys for the first year. For older kids, check out my list for toddlers.

Mombella Mushroom Teether
A cult favorite! My online mom group went CRAZY for this – everyone got one and we’d have huge threads of all of the babies with their mushrooms. I got one too, and both girls liked it. It was so popular that moms in Canada and Australia were sharing notes on where they could find them or close knock-offs. Note that this is best for younger babies, and not recommended for babies over six months.

Mombella Dancing Elephant
This is a great next step after the Mushroom above. This is designed for kids 3-7 months. It has a no-chocking design with a large part to prevent inserting it too far into their mouths. We like this one so much we have bought three (one for each kid!).

Oball Rattles
This is a classic toy! It’s light and incredibly easy for babies to grasp at a young age, and it’s also a toy they can use for a longer time. My six month twins still like grabbing these.

The Winkel
The Winkel has been a huge hit at my house. I’m not alone – it has 5 starts and over 14,000 reviews on Amazon. Similar to an oball, it’s very easy to grasp and hold. It also makes noise (but thankfully not too much). My kids love chewing on the tubes, and Gisele is often grabbing this one away from Vivienne.

Nuby Ice Gel Keys
We bought this for our first daughter, Anais, and it’s been helpful with all three girls. We keep them in the freezer when we aren’t using them, and when a baby is fussy with teething pain, this is our go-to solution.

Dino Egg Teether
What I like about this teether is it’s so small it’s easy to transport and with the clip, you don’t have to worry about it falling down or getting lost. It’s ideal in a stroller or when you are on the go or traveling.

Skip Hop Bandana Buddies
I swear by these! We’ve had the elephant, the fox, and the cat! My six month olds love looking at these, grabbing them, and chewing on them. Gisele prefers to chew on the leaf the elephant is holding, while Vivienne’s favorite is the chewable collar on the cat.

Teething Mitts
These were a huge hit in my mom’s group with Anais a few years ago. I do feel these aren’t as consistently a hit – but for the babies that liked them, they were amazing because they wouldn’t drop them! Of my kids, Vivienne was the one who liked these the most.

Sophie the Giraffe
With over 9,000 ratings on Amazon, it’s hard to go wrong with this one. I’d seen it for years as a popular gift at baby showers, but babies love it! One mom in one of my online groups said her daughter and Sophie are inseparable.

ZoLi Chubby Gummy Teether
This is another baby favorite! I like that is has a large round piece to prevent kids from taking too much of it in their mouths.

Itzy Ritzy Silicone Teether with Rattle
One mom remarked that this teether is inexpensive and has really grown with her daughter. It’s also really easy to grab for younger babies.

Cactus Toothbrush
This is the preferred teether for one of the babies in my mom’s group – his mom says he starts drooling just crawling up to it. A funny aside, she said she only added this to the order to get the required minimum for shipping, but he ended up liking this teething toy better than the ones she had intended to get him!