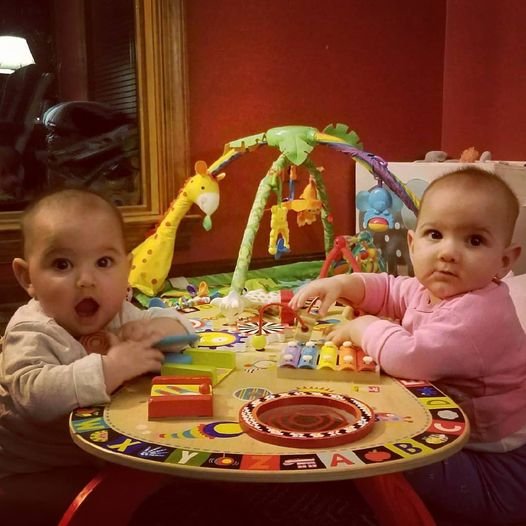 Once again, I’ve solicited suggestions from my online villages for toys for infants. I ended up with so many teething toys it warranted its own post. But here are our favorite toys for our little ones. One thing that I think is interesting is in each of my mom’s groups, the group comes up with different favorite toys. It just takes a few posts on the merits of one’s baby’s favorite toy for it go viral in a group, then all the moms are posting pictures! It’s been interesting to me to see how the different groups have latched on to different toys. The list of toys below starts with toys kid’s will enjoy when they are younger, and the later toys in the list are good for as they approach the one-year mark.

Beaming Buggie Take-Along Toy
This was an absolute must-have in my 2017 August Bumper’s mom’s group. I remember meeting up at Starbucks with a handful of local moms from the group and quite a few of us all had this toy attached to our strollers. My daughter Anais was captivated by this toy. You can attach it to most anything, and it’ll spin around as it dangles, and with the colors and sounds, it is really entertaining for young babies.

Animated Flappy the Elephant
All three of my kids have loved this! It’s gotten so much use that the cute singing voice now morphs into a demonic low voice. It doesn’t seem to phase them, and honestly, adds to the appeal since we are right around Halloween, so I’m just going with it.

Fisher Price Rainforest Melodies and Lights Deluxe Gym
When I was adding things to my baby registry for my first kid, I hated all the bring colors. I wanted stuff that looked nice, and matched my anticipated well-coordinated nursery (which never manifested strangely enough). I had this playmat on my registry. It’s not garish, it’s tastefully simple. I was wrong. Get the crazy colors. Your kids will prefer it. We actually had four different playmats at my house with the twins (we had them on different floors) and the garish green one with sounds and lights was BY FAR my twin’s favorites.

Fisher-Price Deluxe Kick 'n Play Piano Gym
So I never owned this one, but my gosh, I really wanted to, I just couldn’t justify another contraption when we already have so many. The moms in all of my mom’s groups have sworn by these kick and play pianos!

Lamaze My Friend Emily doll
Similar to the toy gym, I wouldn’t have gotten this on my own initially. This doll is absurdly colorful, and not pleasing to look at as an adult. We received this as a gift and were told it was their kid’s favorite doll. I was skeptical. I was wrong. Anais loved this doll as a baby. Her entire face would light up when she saw her, and she was just obsessed with staring at her face. This doll also marks Anais’s first failed attempt at cannibalism. I can’t say the same for the twins since they try to cannibalize each other on a regular basis. But yes, all my kids are creepily obsessed with staring at this doll.

Pop-Up Pals
There are so many variations of this toy, and it’s a classic for kids so you can’t go wrong.

Wooden Activity Cube
You can start them with this toy even when they are still doing Tummy Time, and it really grows with them, as they master sitting, and then standing. This is also a good toy for twins as it’s large enough they can both play with it at the same time without getting into too many fights.

Discover Sound and Play Busy Table
This is a must-have in my book. It’s also great if you have multiples, as the table is large enough for multiple kids to play at once. My kids were able to start using his about 7 months, although we put the Twin Z Pillow behind Vivienne, who is more adapt to just tumble backwards.

Children’s Plush Chair
We’ve now had three of these for my girls! The first one was so worn down from use that we ended up tossing it and getting two new ones for the twins (which they’ll get at Christmas from their grandma, as they just arrived today!). But this chair is great for kid’s closer to one year, as it’s a perfect size, and it’s so plush it’s easy if they fall onto it or over it. They can also use it for a long time compared to some other toys, as Anais used hers until she was about 2.5 years old. She would even drag it places, and she’d sit it in next to her bookshelf when she wanted to read books.

Regalo Portable Indoor and Outdoor Play Yard
This is so handy! We keep it inside the living room now that Gisele is crawling, and it's so easy to take outside, or even to someone else's house.

Please note that links to Amazon and Gobble are Affiliate links and I am compensated for purchases.