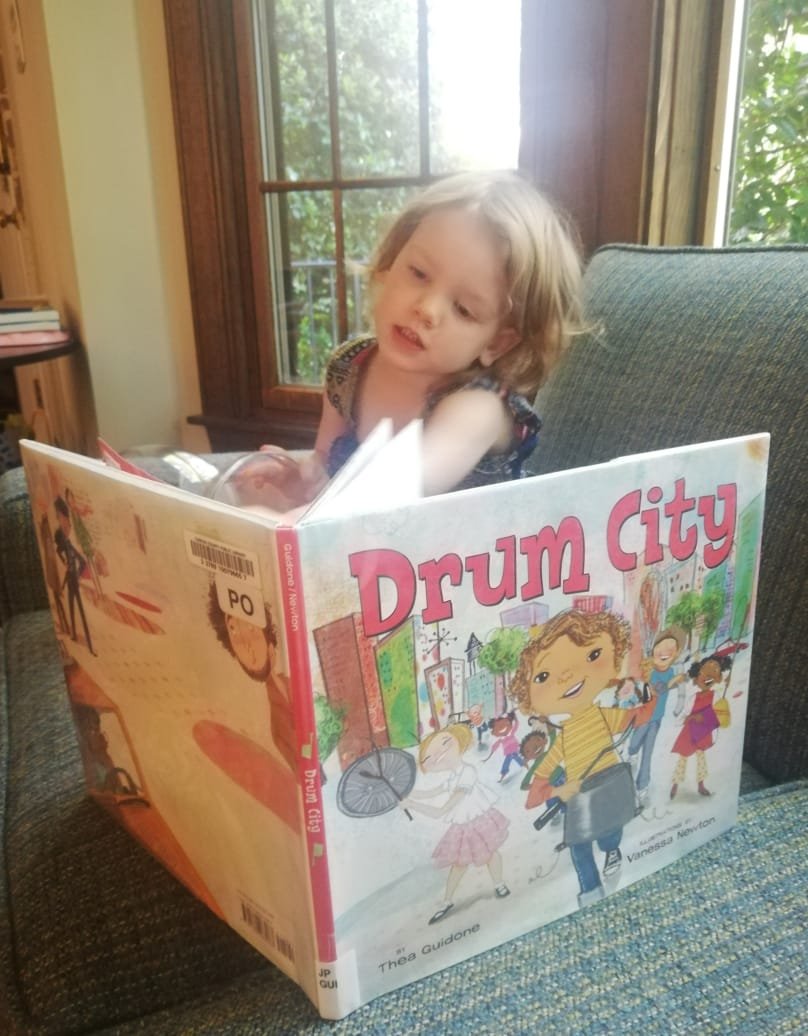 This summer, as Pride month was being celebrated, and people were protesting in the streets over racial injustice, I began doing more reading about what I can do as a parent to ensure my kids are growing up in an environment that discusses and celebrates diversity. I was reading the book, "Raising White Kids," by Jennifer Harvey, and one thing that really came across to me was I need to be actively discussing race (and other elements of diversity) with my kids explicitly. I added some kids books to my 2 year old's wish list for her birthday, and also asked for a non-Caucasian doll (she has three white dolls, even though she herself is 25% Indian).

I also called our local library, and just asked the librarian if she could pick out books featuring LGBTQ or minority characters, and I also asked for some books in Spanish. (Our library was closed for browsing at the time, but you can call and ask for them to help you get books, which is amazing). Our library is next to a park, so I called in, told them we were going to play at the park a while, and they said they'd call me when they were done. Thirty minutes later we had a large bag of assorted books to go through.

One caveat here - I'm passionate about this, but am by no means an expert when I'm talking about diversity. if I say something I shouldn't or don't do a good job saying something, just call me out or send me an email! I'm interested in learning and doing better! Or if you have any book recommendations, comment below or email me! Once I have a chance to read them, I'll consider adding to the list below if I like them.

Here are some of our favorite books featuring diversity in some way or another (in no particular order). The links below are to Amazon, but if you prefer to support an Independent Bookstore, may I recommend Gibson's Bookstore? They are located in Concord, NH but you can buy books online or give them a call at (603) 224-0562. I've purchased from them many times and they are wonderful!

The Class by Boni Ashburn
This is a story about a classroom of kids all getting ready for their first day! It features children from diverse backgrounds, both from a racial perspective as well as from various socioeconomic backgrounds (e.g. many kids have a new backpack, but some don't). We had fun with this book, it often counts out the numbers (e.g. nine kids have breakfast) and has associated pictures for each - letting us count the number of kids doing different things.

Drum City by Thea Guidone
This is our one of my FAVORITE books for kids! It's a simple story about a child banging on a drum, who then gets the whole city involved in drumming. It's incredibly melodic and fun to read. It has such a cadence that my 4 month old twins stare at me with rapt attention when this book comes out. It features an incredibly diverse cast of characters - the pictures show a people from different backgrounds. he book is really fun for kids - because the word "drum" is repeated so frequently, we play a game where when I'm reading this I'll point to my daughter and she yells "Drum!" as we read the book each time it is said. It ends up with fits of giggles. We also drum as we read this, clapping our hands on our knees, the floor, or whatever is handy nearby. 100% recommend!

Salsa by Jorge Argueta
This book is great for bilingual kids or families who speak both English and Spanish. Each page has is in both languages. The book is about a little boy who makes salsa in his molcajete (which you've probably seen before when someone makes you table-side guacamole). The descriptions in this book are really fun, the foods are described as instruments that make music, and it has a great explanation of what tasting a spicy food is like. Many of the pages also have vegetable pictures as a border around the main picture, and my toddler loves to point to all of the vegetables and name or try to count them.

Bronzeville Boys & Girls by Gwendolyn Brooks
This book of short poems and associated images celebrates the Chicago neighborhood of Bronzeville. It was written in 1956 and while the themes are still relevant, a few of the poems are a bit too dark for me to share with my toddler. So I'd say pre-read and choose which ones to focus on selectively! But it's a fun of short poems or stories, many of which really engaged my toddler.

And Tango Makes Three by Justin Richardson
This gem of a book is about a true story of two male penguins, Roy and Silo, at the New York Central Park zoo, who pair up and get their very own egg to raise! It's a great way to introduce the concept that families can have two moms or two dads. The first few times reading it, my toddler kept trying to tell me one was the daddy and one was the mommy, but after some conversations, she at least gets that they are two daddy penguins. I'm unsure how well this translates into understandings of human same-sex relationships, but hey, it's start.
Spoiler Alert: Apparently after six years Roy and Silo broke up - A New York Times article gives you a sordid details, including, "This tale of betrayal, sexual identity and penguin lust set in Manhattan has reverberated around the world."

Prince & Knight by Daniel Haack
This book is a fast and fun read about a Prince who just can't find his Princess. It's not until a dragon threatens his kingdom, and he and a dashing knight save the day that he and his family realize it wasn't a Princess that he needed after all. I like how chill the Prince's family and kingdom are about his newfound love. Also, I like that the knight keeps his scruffiness even after he and the Prince get together.

Heather has Two Mommies by Leslea Newman
I've been trying to talk to my three year-old about families, and that some kids have only a mommy, or two mommies, or other variations including some kids having two mommies and daddies (in cases of step-parents). It never went very well. She'll look at a picture and just identify one of the people as a mommy or daddy, regardless of the implied gender in the picture. This book was really helpful to talk about how families are made up. While the main character has two mommies, the book explores other families makeups, including kids with a single parent, living with a grandparent, or other typical family arrangements. I think this book is best with additional discussion with your child about what makes a family. We then went through everyone in our family, and talked about if they were in our family and who they were.

Please note the above are Amazon Affiliate links. As an Amazon Associate I earn from qualifying purchases.