Incorporating Fitness as a Mom: As Explained by Someone Who Actually Exercises 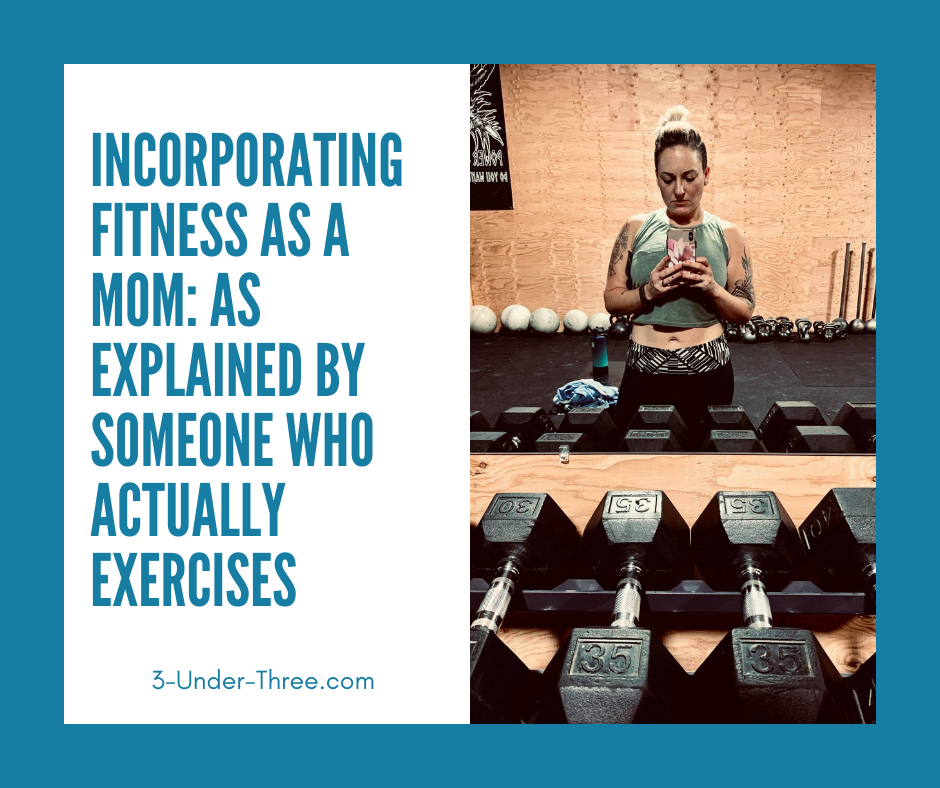 For a while after I had the twins, I felt really good about my ability to find time to exercise. While taking my toddler, Anais, on a walk at a nearby park, I saw two people working out on the basketball courts. It was clear the guy was a personal trainer, and he did a great job at staying 6+ feet away and I thought that idea was brilliant. As we continued our walk, I started to think that this trainer reminded me of the first personal trainer I had half a dozen years ago. Then I started to really think it was him, and as we were heading back to the car, I make sure to casually walk us by them, just to check it out – and it was! We exchanged numbers and started working out in my backyard once a week. My mother-in-law would come over on Friday mornings to watch my three kids, while Janeth (who was living with us at the time) and I would work out with the trainer. This was going really well, and Janeth and I started exercising much more regularly. However, it all crashed a burned a few months later, when after the trainer repeatedly hit on Janeth, and she told him she didn’t want to go on a date with him (with Covid, who really feels comfortable with that anyway?), and he refused to make eye contact, or speak to us for an entire session, other than to tell us what to do in a very dejected manner. After that session, I let him know we didn’t want to continue, only to receive a lengthy text message about all of his grievances, including, “Not once did your husband come out to say thank you for getting his wife in shape.” After that, I felt I made the right decision in ending the arrangement, and I was certain I’d be able to keep exercising consistently, after doing so for a few months.

I’ve never been more wrong. With work getting busier, I just felt like I didn’t have the time, and then I didn’t have the energy. For my birthday in October, my husband gifted me money to use for a new personal trainer, but I haven’t pulled the trigger on that yet, although I’m hoping this guest post will inspire me to!

So, I’m really not qualified to share information or suggestions on staying fit as a mom! But I’d like to do better here. So let me introduce someone who is killing this – and is willing to share more about her experiences and some suggestions for how to get (and stay) motivated! Sadie hails from Alaska! She is a part of one of my online villages – she is also a member of my August 2017 bumper group from when I was pregnant with Anais. I’m incredibly jealous of her. She lives in a place that looks so beautiful, and where moose can wander through your front yard (they really did – she posted about it!). She makes time for the gym regularly and is brave enough to wear midriff shirts to the gym, and shave part of her head (#goals, anyone?). Without further ado, here is Sadie!

Tell Us About Yourself
Hello! So yes- I’m a mom of two now, a 3-year-old named McCoy and my sweet chunky 5-month-old, Murphy. We live in Alaska with my husband where we moved after we both got out of the Navy. I grew up here and wanted to move back for a while after deploying and such. We all love the summers, but winters are hard on everyone- being cooped up in a house with the same people you’ve been exclusively hanging out with since March can wear on anyone’s nerves. It’s enough to make you want to risk frostbite just to GET AWAY. So once my gym opened back up (and I was cleared to work out after my c-section) I was basically chomping at the bit to get some time for myself. 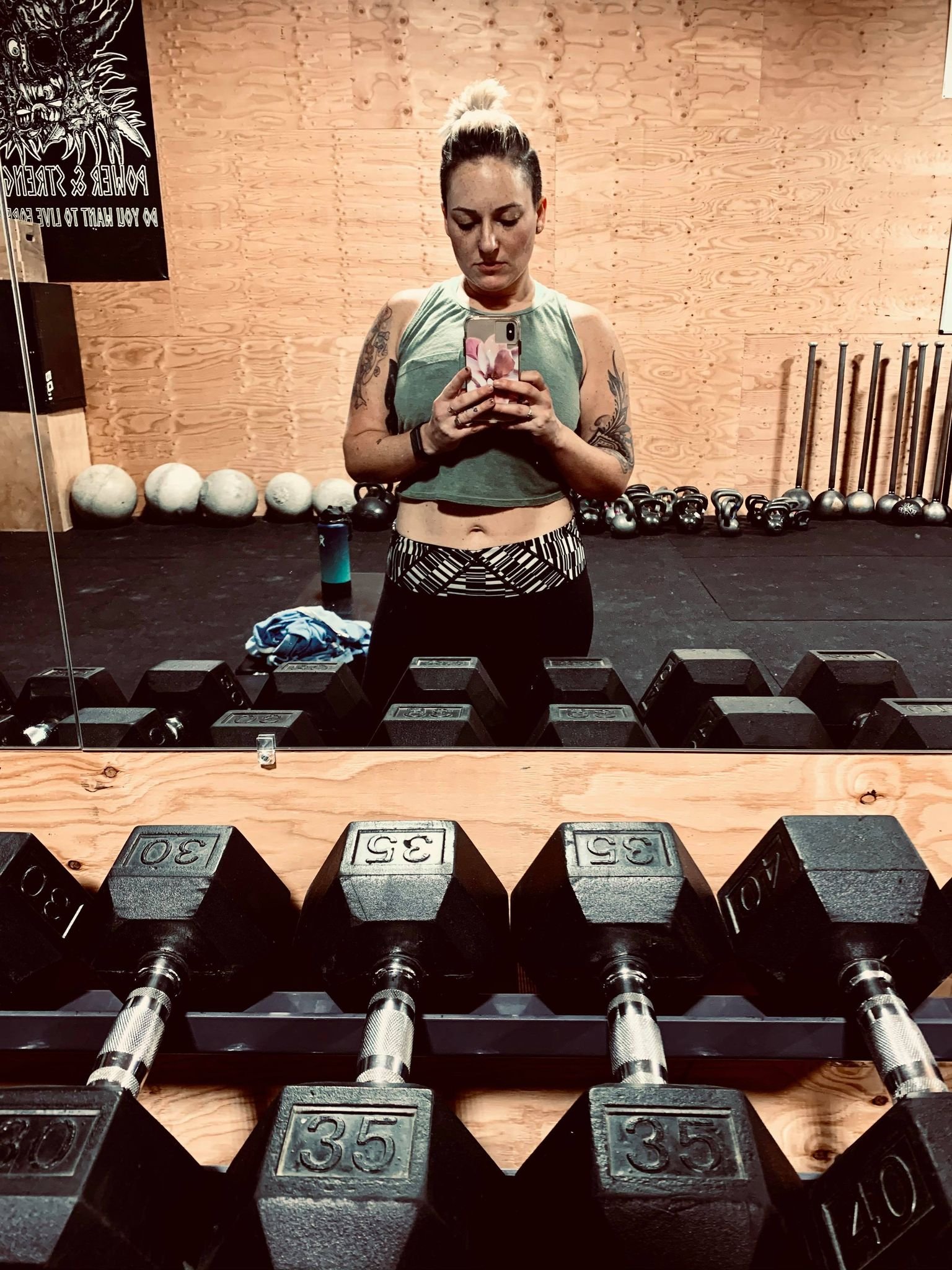 How Did You End Up in Alaska?
I grew up here! I lived here for 20 years until I joined the Navy, then after my service contract was up, me and my husband moved back up here for a bit.

How Often Do You Really See Moose? And Is Your Main Motivation in Working Out to Be Able to Fight One if Needed?
We have a momma moose that hangs around our neighborhood who has 1 or 2 calves each summer and she likes to eat the plants I have taken great care to plant- so we see her or her children (even the older ones) usually like… once a week? They sleep in a little patch of woods between mine and my neighbor’s house a lot of times.

Have You Always Been Active Or Is the Gym a Newer Thing for You?
I’ve always been active, I grew up doing soccer, basketball, swimming, and running. In high school I was on a bunch of different sports teams and the cheerleading squad. Then obviously the Navy is very fitness oriented, and since I was stationed in Hawaii, I got very into surfing and yoga. And the only thing to do with your free time during deployment was eat or workout. Then once I moved back to Alaska, I joined a CrossFit gym to burn off some energy in winter. THEN after I had kids it was hard to make it to the classes, so I joined a powerlifting gym. Of course, I also had times where I didn’t work out at all too. It’s always hard to restart a habit. There, now you’re all caught up on the last 15 years or so!

Tell us About a Typical Workout
Yikes- ok, so my workouts right now are all over the place. I’m still physically recovering from my c-section, so I’m actively focusing on rebuilding my core strength and ab strength since they are such a big part of being able to correctly do movements for other parts of the body. I started going 3-5 times a week starting in the beginning of October, and I’m starting to branch out into more compound and complicated moves. Normally I do a 2000m row to warm up, then I do some strength training moves, then I’ll do a High Intensity Interval Training (HIIT) or just some ab work at the end. All-in-all its anywhere from 1-2 hours depending on how much time I have. On the days I don’t get to go to the gym I try to stay active and play with my toddler- which you know is its own kind of workout. We have a big kitchen island we like to run around and play tag, follow the leader, simon says, etc. Bonus weighted vest = my chonky 18 lb. 5-month-old who insists I carry him so he can join.

What’s on Your Workout Playlist?
I have three playlists I rotate through: one is one I personally made on iTunes, but it just consists of the soundtracks from the movies XOXO and We Are Your Friends with some Lady Gaga and some Lonely Island sprinkled in. The second one is Workout Beats from Spotify, which has a lot of new upbeat songs. Think Lizzo and The Chainsmokers, Kesha, and Post Malone. You know, the things all the kids are listening to these days. The last one is my personal playlist that I constantly mess with on Spotify called Sobas. It’s basically AJR and Panic! At the Disco, with whatever other songs I’m currently trying to memorize so I can belt them out in the car.

How Do You Stay Motivated?
I don’t. Motivation almost never plays a part in why I make it to the gym regularly. It’s mainly discipline and force of habit. There’s no way I want to get into tight gym clothes, drive on an icy road in a cold car, to get to a cold gym and make myself tired and sweaty every week! Just typing it out sounds miserable. But, even though it almost never sounds appealing; usually just being there actually gets me motivated. Oftentimes I’ll just dress in my workout clothes for the whole day until I can get my workout in- that’s the perk of being a stay at home mom right now- no need to dress to impress! The saying I usually tell myself is “Even a bad workout is still better than no workout”. Which means the days that I don’t get motivated and just do the bare minimum still makes me feel better than not going at all. But yea, motivation is almost a nonexistent part of my process. I have to make the choice to actively make working out a priority in my life- which can be hard.

What Does Your Partner Do to Help Make a Regular Exercise Routine Possible?
My husband Matt is so great! He realizes that I’m much happier and more fun to be around once I’m not stressing about how or when to work out, so he’s all for it. With his week on/off schedule that switches between days/nights it gets pretty complicated, so a lot of my workouts happen at 8:30 pm or later most days. Or at lunch or nap time, around 11-1. He’s very into working out as well so it’s nice to have a partner who gets the struggle.

What Advice Do You Have for Someone (like me) Who is not Currently Exercising but Would Like to?
If you wait for the motivation or inspiration- then you’ll wait forever. It’s about force of habit and discipline and most of all CONSISTANCY that will get you where you want to go. Start slow and just do something you know you can do every day. Do wall sits while you watch tv. Do five pushups and sit ups during each commercial break (does anyone even have commercials anymore?) or at the end of each episode. Keep forgetting? Set a timer. Or a reminder on your phone. Tell Siri or Alexa to remind you each day until you start remembering on your own! There are ways around the obstacles if you’re committed. It just has to be a priority that you make time for in your life, instead of just when the inspiration strikes. This sounds kind of preachy to my own ears, so I hope it isn’t coming off that way! I just know that I have always wished I started sooner. It’s a choice I have to make every day to do.

guest post fitness alaska working out moose fitness as a new mom
How to Incorporate STEM When Playing with your Toddler
The Best Unexpected Gifts for Three-Year-Olds
Goodbye Fafner: Rehoming our Dog
Seeking Guest Bloggers
Find me on Facebook and Instagram
My Villages: Finding Support as a New Mom
Comments