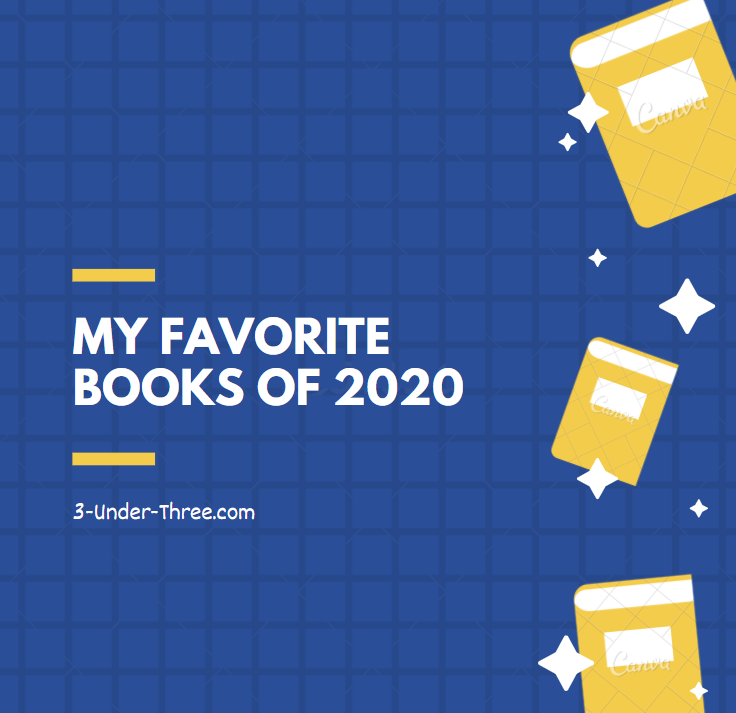 Since I’ve was little, I’ve been a huge reader. Anyone who knew me when I was in school could vouch for that. When I was in trouble and sent to my room, it wasn’t a punishment – because I could read! When I was in college and grad school, I had less time to read for fun (unless you consider peer-reviewed journal articles fun, which a few of you might…). But since I finished grad school, I’ve been back on my reading habit. I read in the car (when not driving of course), on the metro, and I read each night in bed until I’m tired enough to fall asleep.

I also have been tracking the books I’ve read on Goodreads since 2012, so I have almost a decade of reading to look back on! When Anais was a baby, I quit reading books. I was so tired I didn’t have the mental energy to try to keep up with it. I think I just read things on my phone a lot, but in 2017, I read only three books, and only liked one of them! My reading picked back up the pace in 2018, finishing 40 books, then 65 in 2019 and 59 in 2020. I am a little in awe that I read 59 books last year. My guess is a big chunk of them I read prior to the twin’s arrival (okay I counted, almost 30 of them were read those first three months). Being pregnant with twins meant I spent a lot of time resting (and reading apparently). With that said, here are my favorite books from 2020! The links below are to Amazon, but if you prefer to support an Independent Bookstore, I recommend Gibson's Bookstore. They are in Concord, NH but you can buy books online or give them a call at (603) 224-0562. I've purchased from them many times and they are wonderful!

In Five Years by Rebecca Serle
I’m a shoo-in to want to read books that have elements of time travel or instances where the future interacts with the present in some way. When I read the premise of this book – a women, just after accepting a marriage proposal, lands 5 years in the future, for just one hour, but finds herself with a different ring, and laying in bed next to a different man. While this stays with her, she doesn’t give it much credence until 4.5 years later when she meets the man from her bed. It’s an enjoyable story, and I appreciated the rather realistic depiction of her relationships with her current fiancé.

The Invisible Life of Addie LaRue by V. E. Schwab
I adored this book! In 1714 a young woman, who wants out of an impending forced marriage, makes a bargain, but without a chance to read through the fine print. Henceforth, she lives forever, but is forgotten by everyone. That is, until hundreds of years later, someone does remember. I loved the premise of this book, and it was very entertaining to consider the logistics of someone in this type of predicament. I enjoyed it so much that this was a gift I gave someone for the holidays. It’s one of the few books that I liked so much; I think I’ll read it again.

The Two Lives of Lydia Bird by Josie Silver
Lydia’s world is torn apart when her fiancé, Freddy, dies in a car accident. Her physician gives her pills to help her sleep at night, and she discovers that when she takes the pills, she is back to what her life would have been like if Freddy hadn’t died. As she struggles to deal with her grief in real-life, it’s an eye-opening experience as she continues to intermittently take those pills to be able to go experience what life would have been like had he not died.

Such a Fun Age by Kiley Reid
This book was infuriating – but in an interesting and provocative way. In the story, a white woman, Alix, hires an African American nanny, Emira. One night she calls Emira to ask her to take her kid out of the house while the family deals with an issue, and Emira heads to the local grocery store to kill some time – what else do you do in the middle of the night to entertain a toddler? While there, the security guard accuses her of kidnapping. While the situation is resolved, in the moment, this experience resurfaces later. The story is a wonderful depiction of the interesting relationships of having (or being) a nanny. I read this book in September, while I was in the midst of nanny-searching! When you have a nanny, it’s a strange juxtaposition – are you their friend or just their employer? This novel does a great job of telling the story in a realistic and thought-provoking way.

The End of October by Lawrence Wright
When I was reading a ton in the month before the twin’s arrived, I read a lot of questionable apocalyptic scenario books available for free on Amazon through their Kindle Unlimited deal, which lets you have access to a ton of books for free. The books I read weren’t of great quality, but they were entertaining. When I heard about this book, I was so excited to get a well-written apocalyptic style book – and one that seemed especially relevant given our Covid situation currently. I devoured this book quickly when I finally got it from the library in October (the waiting list was so long!). It says something that I was going to bed early each night to be able to read this.

Evvie Drake Starts Over by Linda Holmes
This lighthearted romance features a woman who isn’t exactly morning her husband’s recent passing, even though everything assumes she is. As Evvie tries to extricate herself from the memories of her former relationship, she ends up renting a room to a former baseball superstar, who is going through a rough time. It’s a sweet story that while not too dramatic, provides a compelling story of two individuals finding themselves at the same time they’ve found each other.

Where the Crawdads Sing by Delia Owens
Alright, if you haven’t heard of this boot yet, where were you the last few years? I had seen this book on bestseller lists for a while, but it took me months to be able to get it from our local library. After reading, I understand the hype! The book features a young girl who grows up incredibly disadvantaged, and alone. The story heavily features the marsh where she lives and provides you the chance to root for an underdog to be successful in a world that didn’t give her a chance.

Winter of the Witch (Winternight Trilogy, #3) by Katherine Arden
While I loved this book, you can’t start with it! You need to go back to the beginning and read The Bear and the Nightingale. In this trilogy, a young girl in medieval Russia who can see and talk to spirits – such as the Domovoy who guards the home or the Vodianoy a water spirit who likes to find people to drown. These are influenced by Russian folklore and I loved as I read this book being able to google the spirits and read more about Russian history. While the book has a compelling story, and interesting characters, a huge draw of this series was how much I learned about Russian folklore and life in medieval Russia.

Autoboyography by Christina Lauren
This coming-of-age novel features a bisexual teen who is wonderfully supported by his family. The catch? He’s living in Utah, where others are less than supportive. In this novel, he explores a relationship, only with a young man who is in the closet with this deeply religious family. The book is incredibly charming, and the characters are realistic and likeable.

Pumpkinheads by Rainbow Rowell
When I was younger, I used to read Rainbow Rowell’s columns in the Omaha World-Herald every morning when I ate breakfast. I’ve really enjoyed reading all of her books, and last year I discovered she also had a graphic novel. Now, I don’t think I’ve ever read a graphic novel before, and it’s probably not my preferred type of literature, but I enjoyed this. The story is set in Nebraska (as are most of her books) and is set in a very large, and amazing sounding pumpkin patch. As anyone from Nebraska can tell you – it sounds like Vala’s Pumpkin Patch which is in Omaha. I love going back to Nebraska in the fall so I can go visit with my nieces and nephews. Once I had kids, I was sure that I’d make it an event every fall to fly back to Nebraska for a visit to take my kids in the fall. That hasn’t worked out yet, but I’m still hopeful. Anyway, I know I didn’t talk about the story, but it is cute, and to be honest, I think the main star of this story is the pumpkin patch.


*The above links to Amazon are affiliate links and I am compensated for purchases.