Our 2021 Holiday Newsletter: Unabridged and Unredacted 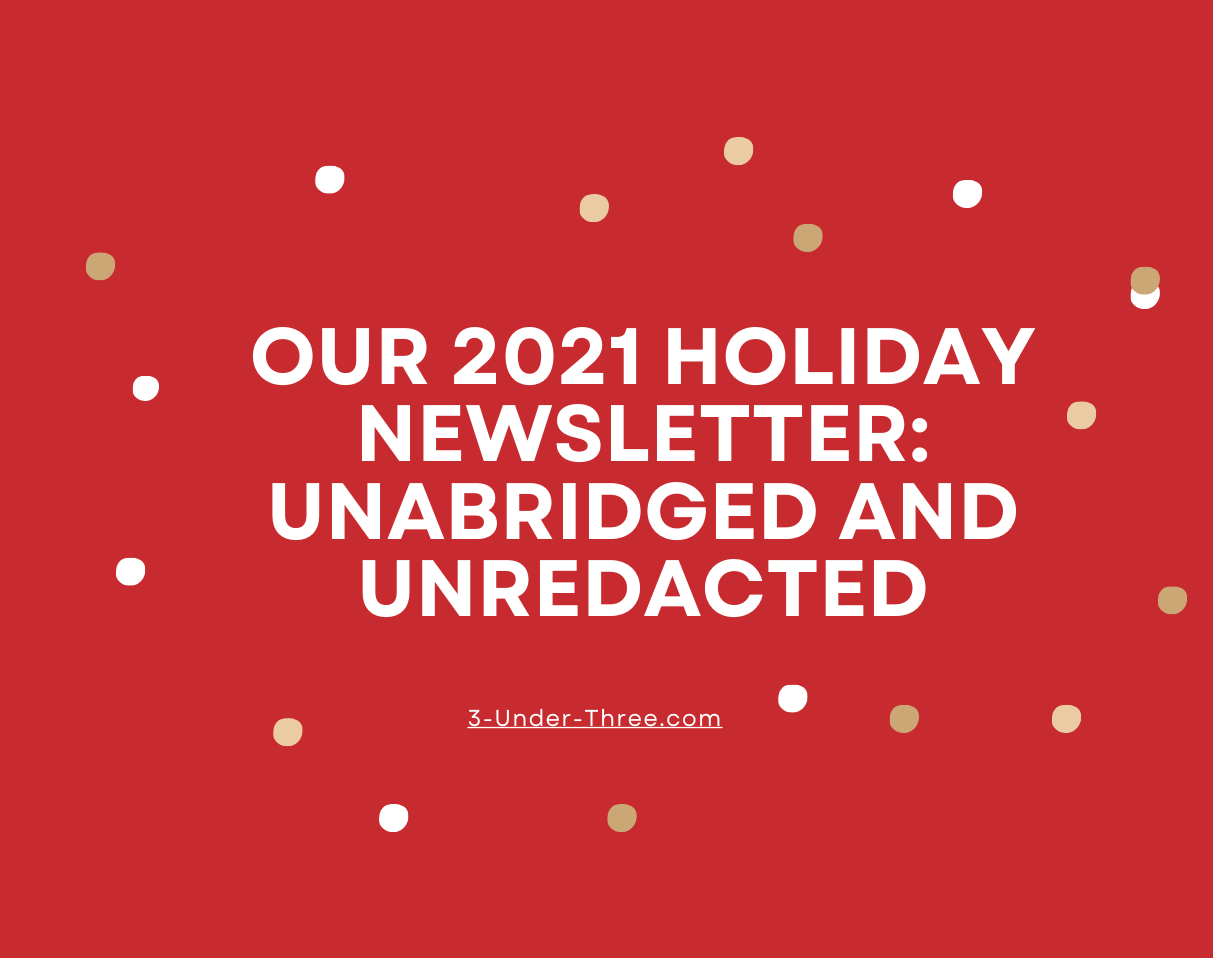 Since Anais was born, each year I carefully reviewed a bunch of family photos, and created an online holiday card, typically in late November, so we could send them out to friends and family. I even did this last year, although looking back I have no idea how I had the time to do it. This year, I was on the fence about it, and my job got super hectic in late November and early December, and it just never happened. It’s that I decided NOT to create one of those nice picture cards, it’s more by the time we received our first set of holiday cards in the mail, I figured it was too late. I thought I could probably write an old-fashioned Newsletter faster than I could pick out photos for a card, and I was correct! However, I had to keep it to one page (or at least I felt I should) but I thought maybe I could have one more chance to tell you how things really went this year. So, I’m introducing our 3-Under-Three Unabridged and Unredacted Holiday Newsletter! New additions are in italics.

Happy Holidays!
You are receiving this traditional Holiday Newsletter because we didn’t have the time or patience to painstakingly choose a set of photos that depict unrealistically happy children to make our usual Holiday card. So as a throwback to Nicole’s younger days when she was in charge of the Neff family Newsletter, here we go!

Vivienne
Vivienne is now 1.5 years old and is our most mischievous child. Her favorite activity is to grab something she shouldn’t have (most often a toy Gisele is playing with) and then cackle hysterically while running away at full speed. (Honestly, most of the time she is grabbing my phone, but I didn’t want to put that in the real Newsletter - I mean, I’d look like an uninvolved parent on my phone all the time - which is probably fairly true). While smaller than Gisele, she makes up for it in sheer conviction and she does not hesitate to go after what she wants. What this really means is that if Gisele has a toy, a piece of trash, really anything Gisele looks interested in, Vivienne comes running at full speed, crashes into her, a few times even grabbing her by her neck to throw her to the floor, grab the toy and run. Gisele, although bigger, just sobs and comes to me with her arms outstretched for me to hold her. Sometimes I go and take the toy, but most often I just placate Gisele with something else. It’s just easier that way.  So really, my house is a house of violence. And her name is Vivienne. Her one true love is Cocomelon on Netflix.

Her most common word these days is “Coca?!!” This is really true. If she cries out in the night and I go check on her, as soon as I walk in the door she says, “Coca?” You see, I set up our nursery with a TV, because I knew I’d spend hours in the room nursing or pumping. And one time, not too long ago, the kids would not go to sleep in the middle of the night, and both my husband and I had big important days at work the next day. And they just would not sleep, and finally, after being awake for 90 minutes at 3am, I just thought, well, I don’t really care if they sleep or not, but we need to sleep. So I put on Cocomelon, turned down the volume pretty low, and just left them there. So they were watching TV at 3 in the morning, but I could try to sleep again, and honestly didn’t really care. But every few minutes the amazing silence was punctuated by Gisele clapping after each song was over. Should I feel guilty about this? I have no idea and honestly don’t care.

Gisele
Gisele is, unsurprisingly, also 1.5 years old. Recently, our family was given a small Highland Scottish Cow, now named Coo. (To be clear, this is a very small stuffed animal, not an actual cow living in our backyard (sadly)). It is now Gisele’s most cherished companion. She carries it everywhere, and sobs when we take it away at mealtime. She cuddles it when sleeping, and then drops it from her crib and screams hysterically until we can retrieve it. I cannot emphasize how much Gisele is in love with this cow. It goes everywhere with her. I can’t even hold her unless she has Coo in her hands. My husband thinks Coo smells like shortbread. I mean, is shortbread Scottish? I feel it’s British at least. So that could make sense. In the beginning Gisele would try to sneakily feed Coo people food. Like, she was really serious about it. Or she’d try to give Coo her milk. So I thought, oh, we are pretending with Coo, are we? I can do this. So I got a cloth diaper, made it a smaller size and put it on the cow. I was met with absolute horror. Apparently while Coo can eat and drink, this cow does not defecate, or if it does, it does so on my floor. As if our floors weren’t dirty enough already.

One interesting thing about Gisele is that she doesn’t talk much (I mean neither of them do, they are just one). But, she does LOVE singing. She is constantly singing, and I’d say 75% of the time you can recognize the melody. What’s also really unique is that the line “I love you” from the song Skidamarink, she’ll say to me when I tell her I love her. She definitely isn’t saying the actual words, but she has the melody down, so I know what she is saying.

Anais
Anais spent much of the year with her Grandmama, Johanne. Anais and Johanne would spend mornings here with the twins and Carol, our beloved nanny, and then afternoons at her grandparent’s house. In August she started preschool! She’s having a good time making friends but dislikes the idea of naptime. She is learning how to write letters and so if you see any random letters written on your card, this is why.

One thing I don’t understand about Anais right now is that while almost every morning she begs not to go to school, the ONLY thing she wants to do with me is play school. At first, I was like, what a great game. I can literally choose to do whatever I want and just say we are doing it at school, and she’ll go along with it. But I quickly learned I didn’t have nearly as much say in the activities at school as I thought. So school is me being the teacher (100% of the time, which is annoying) and she tells me the activities I need to tell her to do. What is even more frustrating, is she has NEVER asked her dad to play school. I called her on it recently and she was like, yeah, he doesn’t play, it’s just you.

Mohan & Nicole
Mohan and Nicole spent another year working from home, so the family has enjoyed a lot of time together, definitely more than is ideal. (I got a little pushback on that second line, but we are home ALL THE TIME - HOW IS THAT IDEAL?) We were lucky to have a few houseguests this year. Janeth returned for six months to visit us again from Colombia, and in November we hosted Ignacio from Argentina. In what little free time we have (which means virtually none), Mohan has enjoyed playing the guitar and getting back into golf. Nicole had another failed attempt at gardening this year, and also tried to update her blog, 3-under-three, although she is painfully aware that statement ceased to be accurate with the advent of Anais’s fourth birthday. (So true, so true).

Honestly, I’d love to say we had a great year and did fun and exciting things, but with Covid, it just feels like we are biding our time at home until we feel comfortable going out again. We try to take the kids to outdoor parks, but I was much more consistent with that when Janeth was hera this summer - nearly every Saturday, assuming the weather was nice, we’d just plan to get the kids ready, and head out to grab coffees (we visited SO MANY coffee places) and go to new parks with the kids. It’s probably still nice enough, even in December lately, to take them to parks, but it’s pretty challenging (mean impossible) to keep an eye on all three of them in a park of any meaningful size, so it needs to be a two-person job. (And yes, I realize there are two adults living in my household, but for some reason this just hasn’t happened lately).

Other Happenings
This summer we visited Prime Hook Beach in Delaware. The beach was amazing, and we hope to visit again another year. Nicole and Janeth also tried to visit as many area coffee shops as possible, so let Nicole know if you need recommendations!  With Covid, we haven’t seen many people yet, but once our kids are vaccinated we hope to be more social once again!

So that Prime Hook Beach vacation was legit! We liked the location so much that just this week we made plans to go to the area again! Only we’ll be going to Broadkill Beach, which is literally the beach next to Prime Hook. Also, my parents will be joining us from Nebraska on this trip. So I’m looking forward to having some Landshark and listening to Jimmy Buffett, because I know my dad can’t do a beach vacation without those two things.

It was great having some international guests this year! Janeth was our fourth Colombian visitor (plus she lived with us most of last year, so she’s just family now), but Ignacio was our first visitor from Argentina. We celebrated by buying a bunch of Argentinian wines to try, and he taught us how to make empanadas. The first batch he made were traditional ones, the next batch we did with Anais, and we did Thanksgiving Empanadas (my creation!) which he thought was really odd, but all my kids enjoyed them. Next up, I want to make empanadas styled after Swiss Mushrooms Runzas (anyone in Nebraska will know what I mean). So far 2022 is looking good for more guests! We have Haruna joining us in January from Japan, then next up is Melvin from France, and then Emma (also from France) will join us just in time to go to the beach (which she seems very excited about!).