Raising Trilingual Kids (or trying to!) 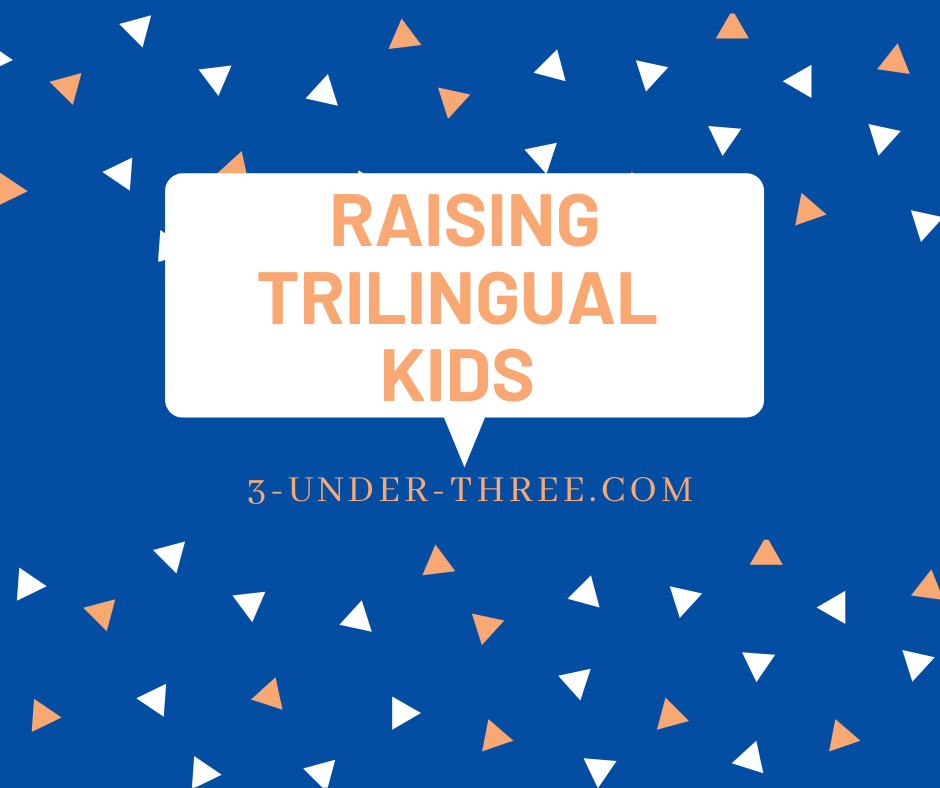 Full disclosure first! I’m not trilingual. I’m not even bilingual. I can say important Spanish phrases, like “Another beer please,” or “Do you want a coffee?” or “Poop.” I’ve always found it incredibly hard to try to learn other languages, and I absolutely do not have an ear for it. My husband on the other hand, went to Peru with me once knowing no Spanish, and was a more fluent speaker at the end of the week (Spoiler alert - he was already fluent in French which I think helps).

My husband has a story he likes to tell that when he was young, his mother spoke to him in French, and his father spoke to him in Hindi. That is, until he turned three and they realized he’d be going to an English speaking preschool, so they switched to English so he’d learn it, and then he promptly forgot both French and Hindi. (He learned French quite well again since he lived in Montreal for a good chunk of time).

But as we discussed having kids, I was thrilled with the idea that we could potentially raise them to speak both English and French. It wasn’t until we were hunting for daycares that I learned that some of them near us either had a focus on another language, or just were run by individuals who were fluent in other languages. We interviewed daycares that focused on Russian, Urdu, and Spanish. We ended up going with the daycare where staff spoke Spanish, so then it became a broader goal to encourage Anais at the time (who was just 5 months old when she started there) to learn Spanish as well. So that is how we ended up with the intent to raise trilingual kids. I’m not fully confident it will work out, and I’m certainly not an expert in languages (given I only speak one myself) but many people are really interested in how we are trying to raise trilingual kids, so I thought I’d share more.

One Parent One Language
This decision was more of my husband’s call than mine, but we use a strategy called One Parent One Language, where each parent communicates to the child in a different language. What this means is that since our kids were born, my husband speaks to them exclusively in French. If Anais responded in English, he’d still respond in French and prompt her to respond in French herself.

Although not a parent, we also tried practicing this with my in-laws who are local. My mother-in-law’s first language is French and so early on we discussed her also speaking to our kids exclusively in French. Sometimes Mohan reminds her if she slips into English (which is easy to do since our group conversations are in English). During Covid, when Anais stopped going to daycare and my mother-in-law was watching her each day while I was home with the twins (and later working), we noticed an incredible increase in Anais’s French fluency. For a while French was absolutely her dominant language, and when she was playing by herself you’d hear her speaking French. Now that Anais started at an English preschool earlier this year, we’ve seen a shift to English being her primary language again, but she still is incredibly fluent in French.

For the record, we did ask my father-in-law to speak to our kids exclusively in Hindi, but that hasn’t been quite as successful. I think Anais may know a few words, but that’s all. But we still encourage him to speak to our girls in Hindi. My thought on this is even if they cannot learn the full language, I figure that having them exposed to the sound and cadence of the language will only help them if they decide to try to learn it at a later date.

Finding Childcare to Reinforce Language Learning
Other than a parent speaking another language at home, I think that finding childcare that uses another language is the next best way to support your child learning another language. My guess is if we had a local French speaking daycare at the time we might have considered it, but the daycare center that spoke French was more expensive and much further away than the other daycares we looked at. We ended up at an amazing in-home daycare near us in Falls Church (message me if you want the name!). The owner was fluent in both English and Spanish, and many of the workers were not fluent in English (which was not a problem for us). We spoke with the owner about wanting Anais to learn Spanish and requested that they speak exclusively to Anais in Spanish while she was there. She attended this day until she was 2.5 years old, and at the time was speaking in Spanish at the daycare.

For our twins, given they were born at the start of the pandemic, we didn’t end up sending them to daycare. Instead, we ended up looking for a nanny, which I have an entire other blog post about. When we created our ad looking for a nanny, I wrote that we were interested in French or Spanish speakers. Another interesting tactic here was that we decided that English fluency was not a requirement for the job. We ended up with an absolutely amazing nanny who is originally from Peru. We communicate in a mix of Spanish, English, and occasionally google translate for difficult subjects. But this means that our twins are hearing Spanish every day, and many of their first words were in Spanish. As an added bonus, my Spanish has improved immensely. When I’m on video calls for work and I have to respond in Spanish to my nanny, my coworkers are always impressed with my Spanish, and I try to explain, I am only fluent in speaking Spanish regarding things around the houses - like asking if things are clean or dirty, when babies had bottles, or if they have had new diaper changes recently. So as long as my conversation in Spanish revolves around my messy house (casa susia) or my kid’s diapers (pañales), then I’m just fine.

Currently, with our kids not yet being vaccinated, we haven’t really done non-family babysitters yet. We had our first babysitter last Friday actually, and it was a teacher from Anais’s preschool. Our thought was Anais was already exposed to her at school regularly, so it was not an additional risk for our family. But later, once we are more comfortable being around more people, then I’d love to also find babysitters who speak Spanish or French to continue to reinforce languages.

Books to Support Language Learning
At home, we have an impressive collection of books in French, and at least a dozen in Spanish as well. We are fortunate that our local library has a large collection of books in Spanish, so we are able to regularly check them out there. But for French books, we’ve historically purchased them from Renaud-Bray, which is a popular bookstore in Quebec (they also have an amazing kid’s toy and art section if you have the chance to visit one). During Covid, we haven’t been able to go to Quebec, so we’ve either had one of Mohan’s uncle’s send us some books, and for Christmas, Mohan just made a big purchase of French books (but let me know shipping costs were a 1/3rd of the total cost - yikes!). Since Anais has so many books in French and English, at bedtime, we’ve historically called them Mama or Papa books, and she’d learned which books are which. However, sometimes she’ll bring me a book and French, and chastise me saying, “Mom, you can try to read it.”

I’m a big fan of books that incorporate two languages. Often they’ll have both sets of languages included, other times they may be primarily in one language but include words from the other language, so you can still grasp the meaning. Some examples of these that I love for English and Spanish include:

Exposure to Others
Over the last three years, we’ve hosted fourteen (yes, 14!) international houseguests that were native speakers of either Spanish or French. We’ve had visitors from Colombia (4), Argentina (1), Spain (2), France (5), and Belgium (2). Our goal is to meet interesting people, learn more about other countries, and cultures, and continue to encourage exposure to other languages for our kids. In the next six months, we have lined up additional guests from Japan (1) (no Spanish or French, but it’ll be exciting anyway!), and France (2, potentially 3). When our guests visit, we do ask them to speak to Anais (and now the twins) in Spanish or French.

Future Ideas to Encourage Continued Language Learning
I am aware that while we may look like we are on a good trajectory right now, it’ll be easy for them to stop learning/speaking and lose the languages they’ve gained if we don’t keep it up. Here is my wish list of what I’d like to be able to do in the future:

So, all in all, I’m not fully convinced they’ll actually be fluent speakers. Right now, it’s a struggle to get Anais to speak in Spanish, although she does understand it quite well. But, I think it’s worth the effort to try, and I think they’ll at least be in a good position if they want to learn these languages later on.

Drop a note below if you have any questions, or strategies that you are using for helping your kids learn multiple languages.

*The above links to Amazon are affiliate links and I am compensated for purchases.