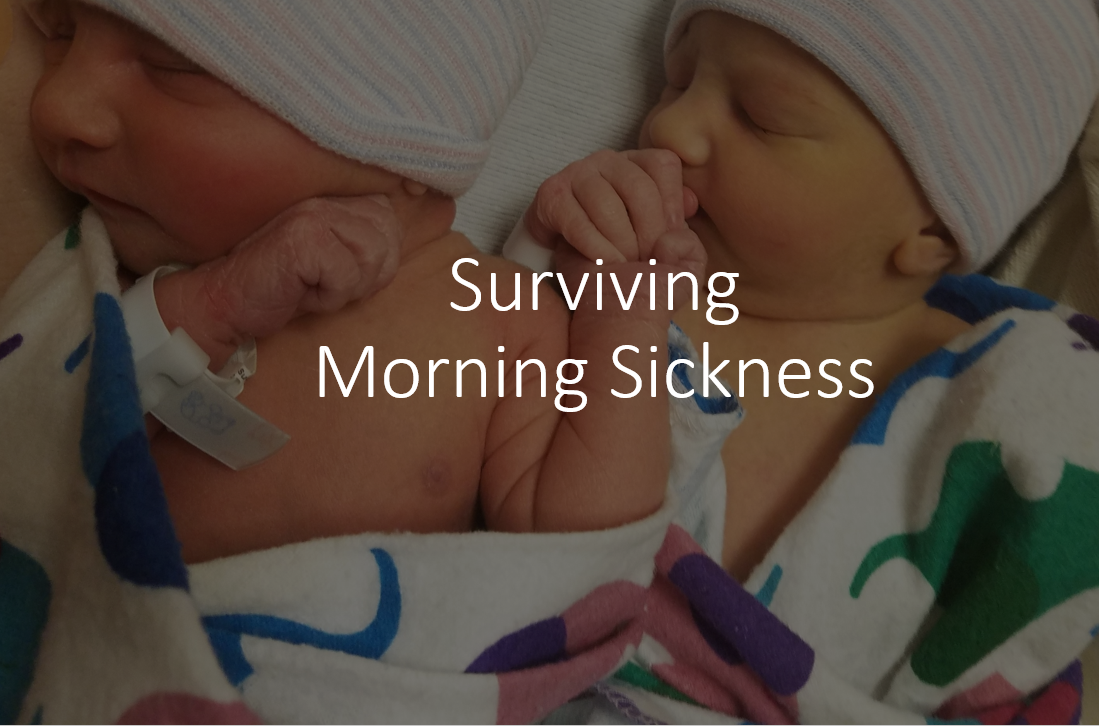 I had morning sickness with both of my pregnancies. It wasn’t just in the morning, and it wasn’t just in the first trimester. I was sick daily with both pregnancies until maybe the middle of the second trimester, and then I was still sick on at least a weekly basis until delivery. Note that the title of this post isn’t about getting rid of morning sickness, but just surviving it. Also, this post has a lot of TMI content, so be warned. (Pregnancy has a lot of TMI content, so I do feel it’s realistic).

Identify your Triggers
Before I even found out I was pregnant with my twins, I sat down for breakfast one day, and Antoine, our current Workawayer (it’s like a cultural exchange program for adults), had made me and my daughter eggs and toast for breakfast (yes, I know I was spoiled!). I sat down and looked at the eggs and immediately knew I was going to be sick. I told him to never make me eggs again, and sure enough, I didn’t eat eggs for months after that.

So yes, eggs were on my list of triggers. Coffee was another big one. The smell of coffee would make me throw up. At my house, my husband had to switch from using a French press to instant coffee to reduce the smell. If he tried to drink the coffee in my presence, I was going to throw up. My friend that I carpooled with I had to ask to stop drinking coffee in the car if she didn’t want me to be sick. Even at work, in meetings, a few times I had to ask the other person if they could finish their coffee before the meeting or have it after. When we went to sign our life insurance policies, they had helpfully put a carafe on the table, and I went out of the room immediately to ask the receptionist if she could move it. I know that was a pain, and you could even say overstepping, but I would literally throw up.

If you are experiencing morning sickness, you’ll soon identify your own triggers. Don’t be afraid to ask others politely if they can make modifications. I didn’t have any instances of anyone saying no, but I also didn’t even try asking others (e.g. the person sitting on the plane next to me). Just take an emesis bag (details below) and do your best to deal!

Helpful Strategies
Having had severe morning sickness for two pregnancies, below are some things I found useful.

After Delivery
For most people, morning sickness vanishes after the first trimester. For other lucky people, like myself, my aversions continue after pregnancy. The smell of hot coffee still makes me feel sick, even six months after delivery. About a month ago, I tried to have hot coffee, and I ended up getting sick in our kitchen. I’m at least grateful I can have an iced latte at this point, at least most of the time.

Please note that links above to Amazon are Amazon Affiliate links and I am compensated for purchases.

morning sickness morning sickness with twins bad morning sickness what do you when you have morning sickness how bad is morning sickness with twins
16Dec
How to Incorporate STEM When Playing with your Toddler
02Feb
My Favorite Books of 2020
16Mar
A Treatise on Bedtimes
04Jun
ASMR Playroom: Q&A with a Tik Tok Sensation
21Jun
Vacation Review: Prime Hook Beach, Delaware
11Jan
The Best Unexpected Gifts for Three-Year-Olds
16Nov
Meet My Girls: Likes & Dislikes
03Nov
10 Questions to Interview Potential Nannies
21Oct
Guest Post: 10 Things to Do After Maternity Leave
20Aug
Children's Books Featuring Diverse Characters
14Aug
Getting Out of the House with Twins - Our Setup
20Aug
Our First Birthstory
14Aug
Cloth Diapers - I hope you love laundry
25Aug
Fertility Struggles - IVF Experience
23Aug
My Villages: Finding Support as a New Mom
14Aug
Preparing for Twins
Comments