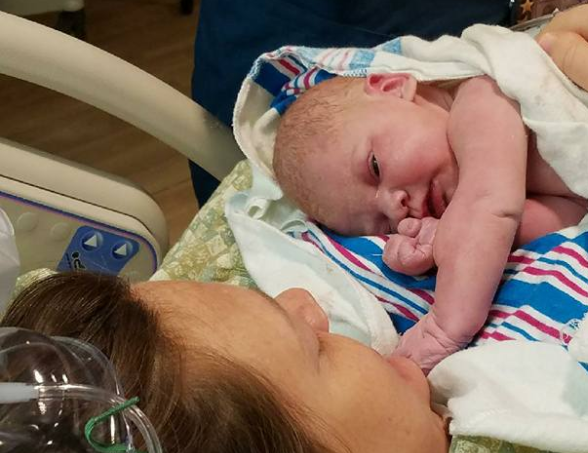 I was 38 weeks and 4 days along in my first pregnancy. I had been half-joking to others that baby was welcome to come at any time, but her lease was up on August 7th and she’d be evicted by the 14th. My husband was holding out for her to come on or after August 1st, as he had bought Queen tickets earlier in the summer and really wanted to go. He also would joke that she’d arrive right before then, and the purchase of the Queen tickets would guarantee us an earlier labor.

That morning, as he was leaving for work just before 9am, I told him that I was either having gas pains or contractions, and he said, “It’s probably gas.” I’m teleworking, so it’s not a big deal and I start my day as normal. Around 11am, I noticed that I was getting gas pains during each meeting (30 minute meetings suggests this could be a regular cadence of “gas.”).  I text him, saying that if they get worse I’m going to start tracking them.

I continue working, and over lunch I call both my doula and my OBGYN's office. The doula suggests I make sure to eat, drink, and rest. She offered to have me come in and get checked out. I said it if wasn’t medically necessary I’d just stay home and call back if I was sure I was in labor and was going to go to L&D.

I’m still working at this point, answering emails, attending meetings via phone, and as we start my 1pm meeting I’m like, “Wait, these are getting difficult to talk through. So at the beginning of the meeting I hand off ownership of the meeting to someone else on the call and stay on mute for most of it. It’s at this point I start thinking I need to start cancelling meetings. I didn’t want my coworkers to get excited, especially if I was overreacting to nothing, so I just “rescheduled” them for next week, kind of thinking I just don’t have to do them at all.

So once I’m done moving work stuff around, I start timing these pesky gas pains. I’m using the Full Term app and initially they range from 17 to 7 minutes apart, lasting anywhere from 20 to 45 seconds, but not really super regular. At 3:40 I make the important call to alert the August Bumpers Facebook group, my stalwart companions in all things pregnancy related. At the same time, I also text my husband to tell him to come home when he can, including a screenshot of the full term app which is starting to convince me that due to the diminishing time between gas pains, this may be another beast entirely.

Then, at 5pm, things escalate, with a set of contractions (yes, at this point I’ve convinced myself this is the real deal) that are now averaging just six minutes apart.  Given I’m supposed to go to the hospital at 5-1-1 (Contractions five minutes apart lasting 1 minute for at least 1 hour), I figure it’s time to call my mom and let her know. The contractions ions are now painful enough that I can’t talk during them and have to hang up on my mom and call her back when they are done.

At 6pm, I send our doula team a screenshot, showing contractions are now between 7 and 8 minutes apart and averaging 36 seconds. I also note, “I think it could be a long night at home maybe?”  This is comical in retrospect. The doulas tell me to try to keep my routine normal and get some rest and we’ll see how they progress overnight.

I then hop in the shower, and as I’m trying my best to relax, he yells up the stairs that I need to shut of the shower as it’s leaking from the ceiling into the kitchen. At this point, I seriously don’t even care. I just get out and go to the guest room shower instead. As I’m in the shower, I then start vomiting as I’m having contractions (not enjoyable in the least) and by 7pm they are now lasting 50 seconds, and coming every 6.5 minutes. Then things really speed up. All the sudden, they are now coming every 3.5 minutes and last about a minute. So I only have 2.5 minutes of recovery. At this point, I hop out of the shower and go upstairs, dumping my hospital bag on my bed thinking I’ll go through it and see what is missing. A few contractions later, starting to come 3 minutes apart I realize I probably don’t have time to pack anything else, and should go in lest I want an involuntary home birth.

I call the OBYGYN office and our doula and we head in.  It is HARD at this point. I threw up SEVEN times from the front door to the car. I had to stop and pause with each contraction, so it took a while….  The car ride was horrendously painful. I was certain that I was going to be pretty far along and that the baby was coming soon.

We arrive at the hospital and at this point, I want an epidural for sure. My previous plan was to labor without one as long as possible, but these were so terrible. We get to triage and the Dr performs a cervical check about 9pm. I have a contraction during this and it is one of the most painful experiences of my life (and mind you, I once broke three bones and dislocated an ankle in one incident). The Dr is up front with me, saying something like, “You are only at a 2, and you aren’t handling this pain very well.” She lets me know of a few options for pain relief. One, which is a narcotic drug, may take the edge off, and if my contractions quit, I can still go home. If I get an epidural now, I could be in for a long night, and I’m then fully committed to having the baby. And it could also increase my odds of needing Pitocin. It’s no contest. I want that epidural and at this point I am willing to gravely injure someone to get it.

We go to the L&D room, and my nurse is super nice, explaining things to me as we go. I need to get a full bag of fluid before the epidural, so it’s a waiting game. Maybe at 10:00 or 10:30 I get the epidural, and while it is hard to stay still during the contraction, the nurse is awesome at putting her hands on my shoulders and walking me through it. After the epidural, I start to feel some immediate relief. And then blessedly nothing.  We are all instructed to get some rest, and I comment to the doula that she can try to go nap/hang out in the waiting area and we’ll text her, and hopefully have a baby tomorrow morning. At this point the nurse kindly interjects and levels sets with us. I was only at a 2, and chances are, baby won’t arrive until the next afternoon! I’m not even in “active labor” yet, which starts when you are at a 5. And that can take a while. And once you are at a 5, it’s about one hour per digit – so another 5 hours to get to a 10. This is sobering news. But I have the epidural and I seriously don’t even care.  As she is finishing her speak, the Dr walks in for another cervical check. No pain this time!! And she exclaims, “You’re at a 6!” The nurse is ASTONISHED. And they revise their estimates to say we will likely be able to start pushing tomorrow morning, but also caution me that it will likely take a few hours of pushing, and I need to rest so I’m ready for tomorrow.

At 11:15, we say goodbye to our doula and settle in for the night. I take this free time to quickly call family to let them know what is going on.

At 11:50, I remark that I think the baby’s heart rate is starting to slow/sometimes sound irregular. Minutes later our nurse comes back in, staring intently at the monitor. She confirms she came back because of the decreasing heartrate during contractions.  I mention to her that I’m feel a lot of pressure down there, and “is that normal? Is the epidural wearing off or should I start pressing the button?”  She looks a bit confused, and says, “Well, I wasn’t going to check you for a few hours, but let me see what is going on.” She checks it out and looks up and says excitedly, “You’re at 10! We can start pushing!”  This blew my mind. I was seriously not mentally ready to do this yet, I thought I had hours ahead of me!  We call in the doula, and we do one practice push, “just to be sure you are ready before I call in the Doctor." I do one, and she tells me to stop because they can see the baby's head.

The Doctor arrives shortly thereafter. She walks in the room, and starts chatting, checking out the monitor and the nurse says, “You need to suit up. We’re waiting on you.” She comes over, looks surprised and is like, okay, let’s do this! We do our first “real” push and I start gagging and vomiting. Joy. We try again, and the same thing. At this point, our doula grabs the vomit cup I was using earlier, not realizing it already had stuff in it, quickly moves to hold it up to my mouth, proceeding to splash my face and neck with what was in the bottle from before. At this point I call a time out (which actually worked).

The Doctor decides that this would probably be easier without the vomiting, so she brings me Zofran, injects it (it hurts and stings so bad) but a few minutes later she says we are good to go. I push again, and no nausea!  Pushing is hard work, but it’s not painful. I just feel pressure down there.  Now we are on our fifth push (including the practice one) and she yells at me to stop. I’m like, “I can keep going! I can feel a contraction!” and she says, “Don’t push! You are already done.” My husband told me that her head was out at this point and with the next contraction her body just slipped out.

At this point it all just felt pretty surreal. I was so grateful that it happened quickly and was relatively easy (except for the terrible contractions prior to the epidural).

I had one second degree tear, which was stitched up. I also asked to see the placenta, which was large and purple. They would repeatedly push on my belly/abdomen but it wasn’t overly painful.

We waited in the delivery room for about an hour, waiting for the epidural to wear off, then they transferred us to the Mother & Baby hall, to a room we then stayed in the next three days. We arrived there may be at 3:00am, and baby stayed in the room with us. We both knew we needed to try to sleep, but we were both much to energetic from the whole night to sleep at all! I think we likely did nap for a bit, but not long. A few hours after delivery, I had a huge fart, to which he exclaimed, “See, I told you it was gas!”

We didn’t choose a name until a day later! We had a “short list” of 22 contenders. Anais was one of the names we had been discussing for the longest time, and the delay was primarily due to us not coming to a consensus on the middle name. Anais will thank me later, as I saved her from the dreaded initials of ASS.

So that's it! We had our first baby!