Covid-19 As Experienced by a Three-Year-Old 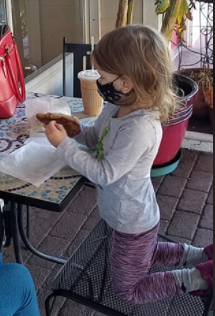 I had recently mentioned to some friends that I was grateful that Anais, at age 3, was young enough that we’d be able to get through this pandemic without her knowing or understanding what was really going on. That was apparently a very misguided thought.

We first started talking directly about the pandemic when the guidance came out on wearing masks, or at least this is what I recall. We’d tell her that we’d wear masks so that other people wouldn’t get sick, and we talked to her that she would wear a mask too. We also talked about keeping our distance from other people.

When I was on maternity leave, we’d often go on borondos (drives around the area), and we’d often discover new parks – we’d see splashes of green on my van’s navigational system, and just head over to check them out. Once, we were at Tysons Woods Park nearby, which has two play structures, one for toddlers, and one for older kids. We were at the toddler park, and we were the only ones there. A while later, two older kids came by with their parents to play at the other play structure. Anais wanted to go over there so badly, but I told her we had to keep our distance to make sure no one would get sick. She took this to heart, and then would loudly exclaim, “I don’t want them to get sick,” over and over again. I didn’t know what these other kids knew about the situation, so we just ended up leaving, as I didn’t want to make them, or their parents worried.

Even with the example above, which happened early this summer, I thought we were fortunate that Anais’s age prevented her from understanding much. But on Thanksgiving, we were in the car looking at Christmas lights, and I asked if she wanted to sing Christmas carols. We sang jingle bells (she knew it last year but needs to relearn the words this year). When we finished singing, Anais told me that the song made her sad. When I asked why, she said that at Issa’s house (Feliza was her daycare provider before the pandemic), she and the other kids would sing it together, and it made her sad because she doesn’t go there anymore because of the “veerus.” I wasn’t sure what she said at first – apparently, she pronounces virus in French. She said once the virus was over, she wants to go back and see her friends. This made me so incredibly sad I may have cried a bit in the car. She hadn’t spoken about her daycare in months, and I was under the assumption that perhaps she just didn’t remember it.

Given how sad she was, we arranged today to go visit Feliza and see her old daycare. Anais got to see Feliza (but was extremely shy), and we took her to the backyard to see the toys she used to play with, and then went inside the daycare briefly so she could look around. The daycare had been closed since Thanksgiving, so I felt okay with this since we were all wearing masks. She didn’t seem to remember too much, but she did say that used to play with some of the toys. I’m not sure if the visit had the positive impact we intended, but it was great to see Feliza again, and give her a chance to see the babies. I do worry frequently about the social aspects of being in such isolation. Other than our immediate family, Anais has really only seen seven other people since March. We keep to our pod very strictly, and we don’t feel comfortable letting her play with other kids at this point. We are fortunate that in our pod is Anais’s best friend (another 3-year-old). But I do worry that not having regular interactions with other kids may put her, and other kids, at a disadvantage socially as they grow older. I do joke when I talk about this, that I just remember reading the Little House on the Prairie books – and those kids didn’t have regular playdates, and most of them turned out fine. At least I hope they did.