The Practicality of Being Three 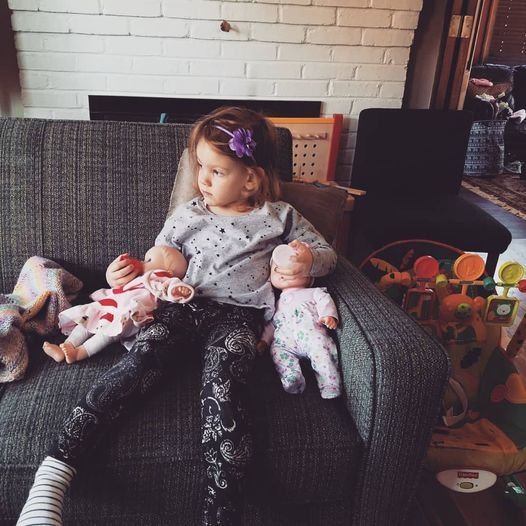 So I’ve heard about the concept of a “Threenager,” but for me, that doesn’t ring true with my 3-year-old, Anais, at all. Anais is more like a little-lawyer-in-training. She’s exceedingly practical, and she can come up with a solution for most anything she is faced with. I often hear, “I have an idea,” which I absolutely love, as it’s incredible to watch her learn, grow, and innovate. Below are some of my favorite recent stories of Anais being three.

No Mom, It’s Just a Feet Hug
Not long ago, while putting Anais to bed, I was laying down with her, and she started kicking my face. I told her not to do that, and that if she was going to kick me, I was going to go. She said, “No mom, I not kicking you. I’m giving you a feet hug.” Most times, if Anais is pestering me, and I ask her to stop she’ll respond with a variation of this. “No Mom, I just fixing you.” “No mom, I just cleaning you a little bit.” She has a rationale explanation for everything.

Taking Buska to her Grandmama’s
For being three, I think Anais is an incredible problem-solver. Earlier this week, she wanted to take Buska, our dog, with her to her Grandmama’s house that afternoon. Buska isn’t usually allowed there, although she’s been there a handful of times in the past (usually on Christmas). So I told her to ask her Grandmama, who said that Buska couldn’t go, because she didn’t have things for Buska there, like food or her water dish. A few minutes later, I walk into the kitchen and see Anais has brought up Buska’s water dish from the laundry room and has gotten a plastic baggie out of the kitchen cupboards so she can take food for Buska. In the end Buska didn’t get to go with them (which resulted in some very real tears), but it did teach us a valuable lesson – that we need to be careful in how we say no, because she is coming up with solutions to solve the issues we present to her.

The Story of the Waffle
This story is also known as the story of why Anais thinks she gets a cookie anytime she stays in bed all night. In September, we went on vacation and rented an AirBnB in Montross, Virginia. Anais slept upstairs and shared a room with Janeth, our friend who lived with us for most of this year. I was sleeping downstairs, so that I didn’t have to take the babies up and down the stairs when they’d sleep. So each night, it was a challenge to get Anais to stay in bed. Her consistent complaint as soon as we’d try to leave the room was that she was hungry. We knew this was usually just a ploy to be able to go downstairs, so I told her this detailed story of why the kitchen was closed. Now, my stories at night are a mixture of my imagination and hers, as I’ll ask her questions and she can decide what happens in the story. In the end, the story I told was about a Princess who was walking in the forest and came across a house – the very same vacation house we were staying in. She was very hungry, and asked the kitchen to make her something special – she wanted a waffle! Now, depending on the evening, either the kitchen was out of waffles, or Anais had already eaten them all. But regardless of why there were no waffles, this Princess was VERY UPSET. And she cursed the kitchen. So now, each night at bedtime, the kitchen is closed until morning. So each night, when she’d say she was hungry, I’d tell the story of the Princess and the cursed kitchen. She totally bought it. And she had never had a waffle (that I know of), and so waffles took on this mythical legend. One night, towards the end of the trip when she would just NOT stay in bed, I told her that if she stayed in bed all night, I’d go into town and get her a waffle the next morning. It worked. But then the next morning, as I’m looking at the very few restaurants in the small town on Montross, I realize no place has waffles for breakfast. Eventually someone (my Mom maybe?) tells me that she won’t know the difference if I get her something else. So I took Anais with me and Janeth that morning to the local coffee shop (The Art of Coffee, which I 100% recommend if you are ever in the area). They had those large black and white cookies, and so I told Anais it was a waffle cookie (which she had no reason to doubt) and she was so excited! So now, she calls those cookies waffle cookies.  Earlier this week, we were at a local coffee shop (Greenberrys, which I also recommend), and she saw a waffle cookie, and looks at me and says solemnly, I stayed in my bed all night last night, so I get a waffle cookie. I didn’t argue. She got the cookie. Also, even now at night, when she says she is hungry, she'll say, "Can you get me something not from the kitchen?" because she apparently thinks all kitchens are closed at night?

It’s Not a Real Turkey
There is a house in our neighborhood that always has inflatable decorations in their yard. They have at least half a dozen for Halloween and Christmas – but they also have decorations for other holidays and seasons, and I’m pretty sure there is always one up in the front yard. This is Anais’s favorite house. She frequently requests that we drive by it so we can see whatever the current inflatable decoration is. Right now, it’s a very large turkey. We had a windy day recently, and when we drove by, the turkey had fallen over. Later, when she was with her grandmother, I got a phone call asking about where the fallen turkey was, as she was insistent, they needed to drive by it on the way to our house. So you can see, it’s really a big deal here in our house. Two night ago, I was in the car with Anais and we drove by the house, and we couldn’t see the turkey! I told her maybe it was on a walk and we could drive around and go look for it, as I knew that just a few houses away in a cul-de-sac, was the exact same inflatable turkey. She responds, “Mom, it’s not a real turkey. It can’t walk.” So much for the magic of childhood, I guess.