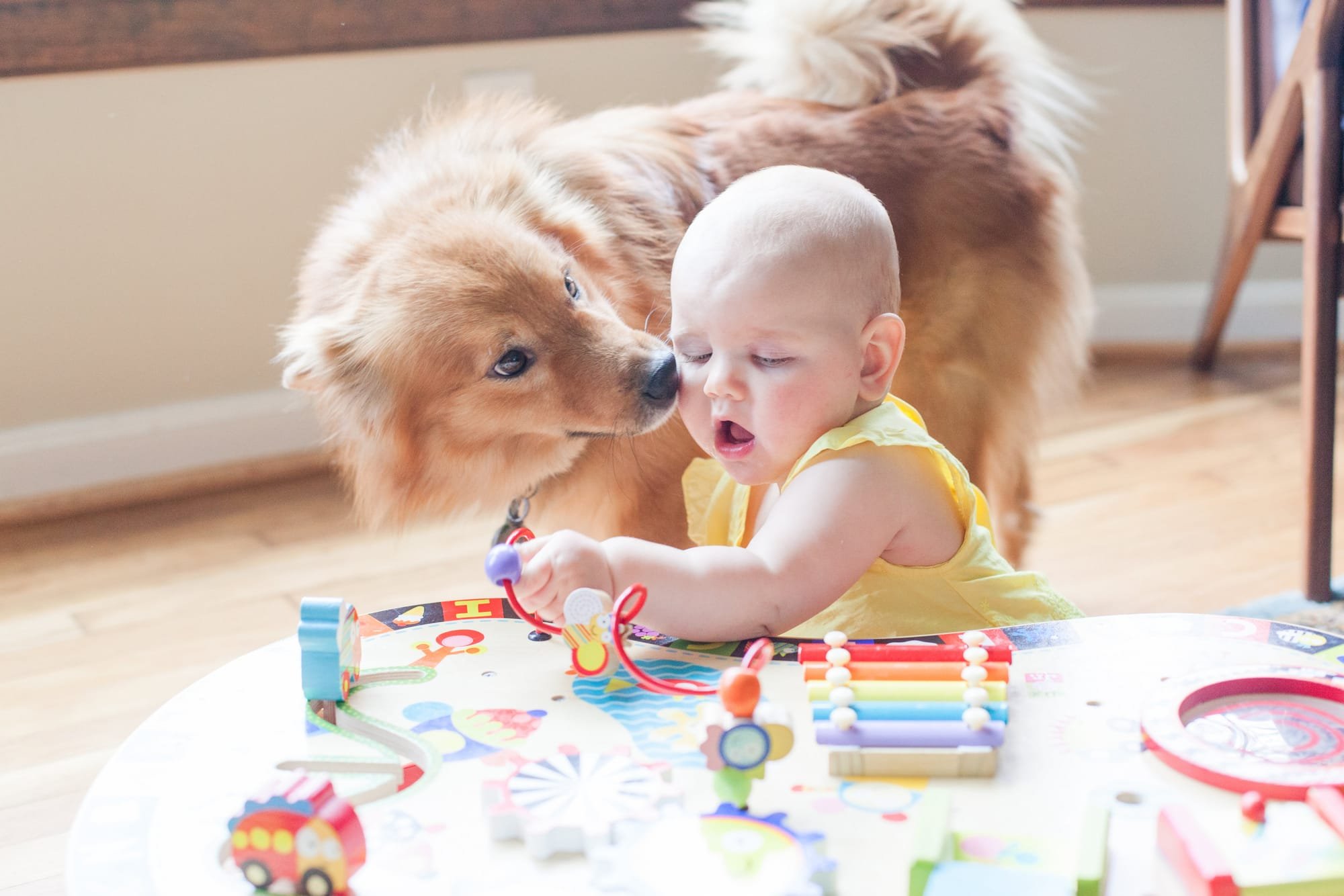 For some new parents, they must consider the previously inconceivable – determining whether their cat, dog, or other pet, is still a fit with their family. I feel there is also a lot of stigma around re homing pets, and it’s not something that is easy to talk about. In my mom groups online (see My Villages), this is a topic that comes up pretty frequently and it’s always a topic that is broached so delicately, like someone is afraid of offending others. I’d like to reduce some of the stigma that comes from this type of discussion, so I’m going to share my family’s story on our decision to provide our Icelandic Sheepdog, Fafner, a new home.

Year ago, when we were still struggling to conceive, and trying all the different treatments recommended by our endocrinologist, I came to a point where I felt we were never going to be able to have children. Given this, it seemed logical at the time that the best thing to do was do adopt another dog (I’m probably less sure of that logic now). We already had an Icelandic Sheepdog, Buska, that we adored, and that was a part of our family. We had previously considered a second dog, especially after seeing how much fun our friends who had multi-dog households had, and how much those dogs seemed to really enjoy each other’s constant company. But we didn’t have a big house, and it seemed overwhelming to consider another dog when we were trying to start a family. (To be honest, I’m pretty sure I was the main driver of this decision.) When we hit a point where things felt impossible, I gave up at that time, and we decided to move forward with getting a dog. I’m sharing all this because it makes me feel even more guilty about the situation – that I got a new dog when we couldn’t have kids, and then found myself in a position where we rehomed him after having kids later. I’m about to share more about why, and I think we made a good decision, but there are still a whole lot of feelings here.

Fafner and Buska quickly became best friends. They loved to play together, and often were found sleeping side by side. Prior to getting Fafner Buska wanted a lot of attention (as in she wanted us to throw a ball or play tug of war constantly). Having Fafner gave her another playmate, and for us, it was really enjoyable to watch them have fun together.

I’d be remiss if I didn’t mention some of our previous challenges with Fafner. While he was an amazingly gentle dog when at home with us, we struggled when taking him on walks or to the vet. If he saw other dogs, he would often become aggressive and bark at them and lunge on his leash. I tried working with him, we took him to obedience training, and I tried different harnesses, and even a canister that was supposed to emit a high pitched noise to distract him. In retrospect, we should have tried to get this more under control before our lives became substantially more hectic once we did have kids later. I had thought those issues were limited to just when Fafner was with other dogs.

One day while I was on maternity leave, taking a much-needed nap upstairs, I came down to find out that Fafner had bitten Anais, who was then 2-years old. I didn’t see this myself, but what I was told was that Anais spilled a glass of ice water, and while my husband was cleaning it up, Fafner had grabbed an ice cube in his mouth. While he was chewing on the ice cube, Anais was nearby and gave him a “hug” (meaning she likely put her arms around him, and may have even squeezed, I don’t know. We often had to tell Anais to leave the dogs alone, and we always watched them together. In this case, two adults were in the same room, right next to her, but they said it all happened so fast, she reached for him, and he bit her. She had a small bite mark, but it was only about an inch under her eye.

That afternoon, I contacted the breeder and Fafner’s prior owner to ask if we could talk about the incident. She generally knew of our situation with him and other dogs, and we shared the story about Anais. She mentioned that if we needed to re-home him, there was never a better time. With Covid, everyone was looking for a new dog. We did not come to that conclusion right away. Our breeder offered to reach out to some dog trainers she knew to ask their advice. Upon continuing discussions, our thought process was that yes, ideally we should always be watching our children and our dogs, but that it was going to be really hard, especially once the twins start moving in different directions. I know some people keep their dogs and kids separate, but Fafner was so people oriented, it would have been miserable for him to be caged during the day or separated from the family. It was also an issue that there wasn’t a warning sign – there was no growl, no time for us to notice that something was wrong. With these things in mind, we wanted to explore re-homing him.

Our breeder was so incredibly helpful. Given we had new twins, and were overwhelmed, she offered to do the leg work in finding Fafner a new home for us. I’ve never placed a dog, and I by far trusted her judgment more than mine as to what the ideal situation would be. Not long after our first conversation, she told me that the owners of Fafner’s sire (who has since passed) were interested. They were currently fostering another dog and would need to wait until he left before taking Fafner. Honestly, I was glad of the delay. We were constantly watching Fafner and Anais and were really careful to ensure he had his space, and this allowed me some time to come to terms with the situation. I’m not going to lie, it was incredibly sad, and every time I had to talk about it I ended in tears. I had also recently been diagnosed with Postpartum Depression (but I mean, what new mom isn’t during Covid?), which made this feel even more impossible. It also let us invite his new owners over so they could meet Fafner (and so I could meet them!)

It was a horrible day when Fafner left. I was so incredibly sad all morning. To be honest, the hardest part was the week leading up to his departure. I was still sad he was gone, but it wasn’t as bad as the dreading of it beforehand. Fafner’s new owners sent me regular updates, and some pictures of him adjusting to his new home. He sounded like he was doing really well.

About six weeks later, we planned a trip to go visit Fafner. It was an hour drive, and we did it with all three kids. Due to Covid, we stayed on their back porch, and sat far apart with masks on. Fafner looked great. He was excited to see us, but it was clear he had developed a strong affection for his new owners. It was also nice for Anais to see him, although to be honest, she was most excited about their tomato plants (she made all of us get up and go see the tomatoes with her). When we left, Fafner wasn’t anxious or even trying to come with us, he was sitting right next to his new owner.

I’m really glad we went to visit. I now feel confident in our decision. I know he is loved, cared for, and is happy. I also like that we have a bit of an “open adoption” where we are able to go visit Fafner in the future.

I know this isn’t a situation anyone ever wants to be dealing with, but I do think that talking about these types of decisions more openly and honestly may help new parents figure out the best solution for both their family and their pets. If you are struggling in this type of situation, I feel for you, and I trust you’ll make a choice that is best for your family.