Twin Delivery at a Birth Center 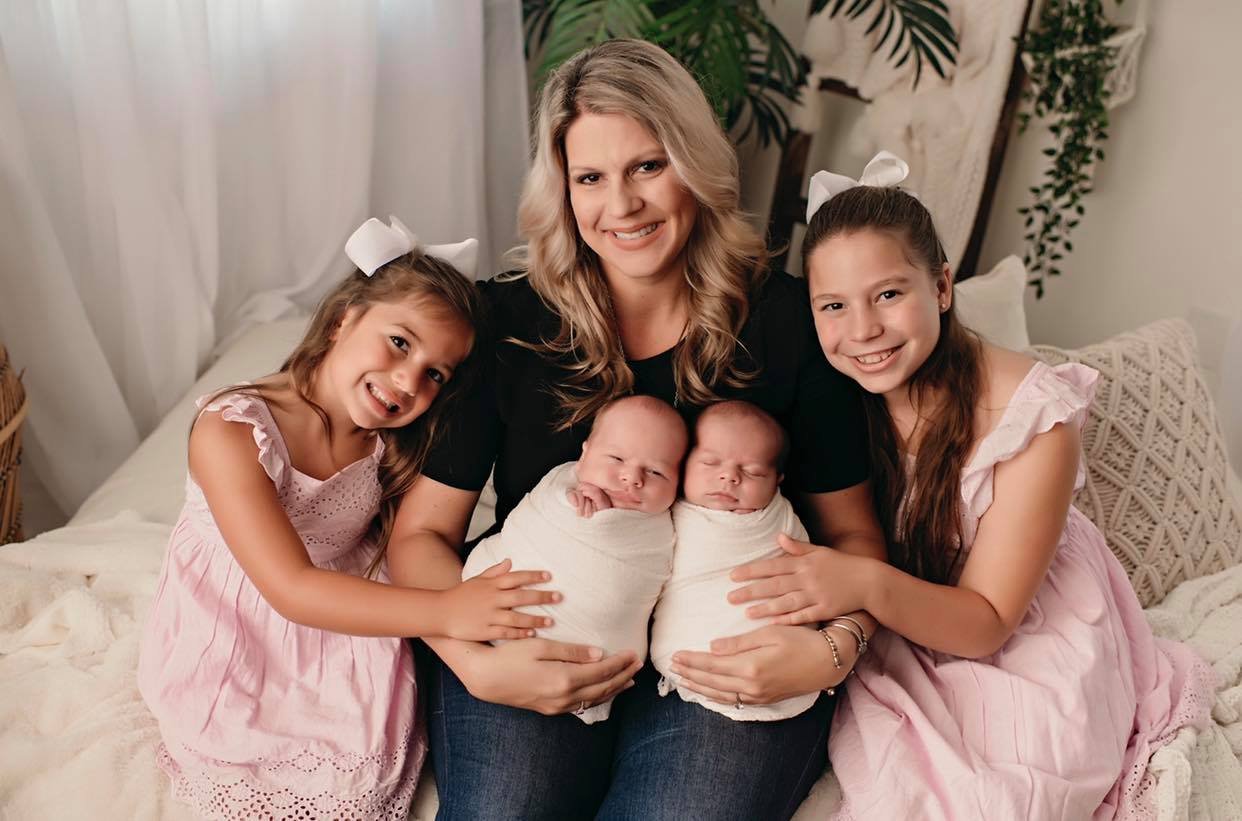 Thanks so much to Lynzie, from The Woodlands, Texas, for sharing her story with us. Lynzie gave birth to her twins, Beckett and Bennett at a Birth Center during the pandemic! Thanks so much for doing a Q&A session with us Lynzie!

Tell us a little about yourself.  I’m married to my high school sweetheart. We have an 11-year-old girl, a 6-year-old girl, and now 5 ½-month-old boy twins. I’m currently a stay at home mom, but I’m also a LMSW (Licensed Master Social Worker).

Why did you choose to share your story with us? Who doesn’t love hearing and telling birth stories, especially twins!! If I can have twins unmedicated and exclusively breastfeed them with two other children, anyone can!

Being Pregnant with Twins

How did you find out you were having twins? I found out at my first midwife appointment. It was supposed to be a meet and greet type appointment but to calm my nerves of having twins she did a quick ultrasound to prove it was only one baby. After feeling my uterus externally, she was puzzled because it was larger than normal for 9-weeks. She did an ultrasound quickly and clearly showed TWO di/di twins!

Were twins something you had expected or hoped for? Fraternal twins run heavy on my mother's side. I have twin sisters, a twin great-grandmother, and twin cousins...I was also 35, overweight, and had a high-fat content diet (keto). All “risk” factors of twins. I have a funny story to share. About three years after I had my second child I called the birth center asking if they would see me if I was 35 or older. They said yes. I asked - what if I have multiples. They said no. Three years later that same birth center started accepting multiples and, with new ownership, agreed to have me as a patient.

How did you announce the news? We FaceTimed family (we’re in Texas and they’re in Louisiana) to announce the pregnancy (before knowing it was twins). We had our girls wear “biggest” and “big” sister shirts while blowing out their 10th and 5th birthday candles!

What did your husband or family say when you told them? My husband said “what’s next?” he was not at the appointment because he’d “been there done that.” I could have used him there. I cried for two weeks straight. My family and friends were much more confident than me that I’d be a great twin mother. They were also not that surprised since we have lots of twins already. But my husband’s family don’t have twins and they were ecstatic. They threw a BIG gender reveal! Everyone cried when learning they were boys. We just knew we’d have four girls and were so happy our family would be “even.”

What was your pregnancy experience like? It was ROUGH! My singleton pregnancies were glorious! I LOVED being pregnant. My skin and hair glowed! But my twin pregnancy took a major toll on my body. I had no actual issues but every pregnancy symptom ever! I couldn’t breathe because of the congestion. My hands would get completely numb. I was severely swollen. The list goes on but still, I was happy to be pregnant and my hair was nice and thick!

What changes did you make at home because of your pregnancy? I sat down in the recliner some! My husband thought I had the flu the first time he saw me sitting! I didn’t/couldn’t go upstairs towards the end.

How did you manage the exhaustion? I went to the chiropractor twice a week. Got massages and acupuncture.

What suggestions do you have for other pregnant twin moms? Don’t rush the pregnancy! Enjoy all the movement! You’ll never get to feel them inside of you ever again. Take lots of belly pics!

Are there any books or products you would recommend so far? Garden of Life Prenatals and Breathe Now Natural Sinus Relief.

How did you decide where to have your twins? I knew I wanted to have them unmedicated. My midwife was licensed and accredited (not all are). In Texas you can have multiples at home but can lose your accreditation if they are born in the birth center. A home birth was our goal.

Did you use a doula? I hired a postpartum doula. But didn’t need her as much as I thought. My midwifery team (6 women total) helped me through labor, delivery, and tandem latching/spoon-feeding.

Since you were planning a home birth, did you get unsolicited advice from others? I was constantly told by other multiples mothers and medical friends not to do it. It only made me want to succeed with my unmedicated birth plan more. My family and friends were supportive. They think I’m much stronger than I am. My husband acted like it was a piece of cake for me!

Did any pregnancy complications factor into your experience giving birth? I’d already had singletons at 42 and 41 weeks. Never any complications. I was an excellent unmedicated twin birth candidate. My twins were di/di with very thick membranes and this is the lowest risk kind.

How did the pandemic impact your birth experience? We had them at the beginning of the pandemic. My girls had to stay in the vehicle for appointments and my providers wore masks but I did not. The birth center wasn’t as strict because the was a smaller environment. During the birth we were the only family at the center.

How far along were you when you delivered? 37.6 weeks

What was your labor and delivery experience like? It was the scariest, most miraculous moment of my life. Since my singletons were so late, we knew my twins would want to stay in as well. At 37 weeks I had two membrane sweeps. I also started MANY natural induction methods. Everything from sex to essential oil (ingested and topically). After two straight days (breaks for sleeping at night) I finally went into labor. About 4-6 hours in I no longer felt Baby A move. We called the midwife. She checked me. Then my water broke while on my bed. I was 6cm but we couldn’t find the heartbeats (I felt Baby B moving the entire time). She suggested rushing to the ER but I asked for the birth center. I knew I’d get a c-section (what I wanted to avoid most) at the hospital and with covid it would have been a mess. We went to the birth center and couldn’t find Baby As heartbeat. A trained ultrasound technician came she found it! I was 8cm and got in the tub for some pain relief. Baby A (Beckett) was born about 45 minutes later. He was not breathing so 911 was called and after 24 mins he began to breathe on his own. My husband held him skin to skin until his breathing was regulated. Since he showed vast improvement quickly my husband made the decision not to send him. Forty minutes later Baby Bs heart rate began to drop. We were about to call the paramedics back in when my midwife told me to push no matter if I felt like it or not. Baby B (Bennett) was born perfectly healthy. Then my oxygen began to drop. They prepared the oxygen tank for me but I declined. I felt fine. It just took some juice and a few minutes to breathe without anything or anyone literally ON me and I was fine. We latched both babies on as much as possible and spoon-fed them colostrum while my uterus painfully contracted. This was my most difficult and painful physical postpartum recovery. Now it’s 5 ½ months later I and I still have horrible pelvic pain. My twins were 7.7 and 7.8 pounds. We all left the birth center 100% healthy four hours after the birth (standard time for a singleton pregnancy). I feel so grateful, blessed, and empowered to say that. Just the other day I was able to look at Beckett’s picture after birth. He was on my stomach completely white, chest contracted, and lifeless. I would run their birth through my head every night for months after, praising God He breathed life into my baby. I thank God He gave them life and I didn’t have to have a c section and they didn’t have to go to the NICU. Had we been in the hospital, without a doubt I would have had a c section and Baby A would have had to go to the NICU.

How was recovery? Physically much more difficult than my singletons (who were 8 and 9 pounds both with vaginal deliveries). That was cake compared to my twins. I still don’t walk straight. I had to hold my stomach up for a week while my insides figured out where to go!

What advice would you give to other pregnant twin moms? Trust your provider. Stuck up for yourself but take the pregnancy and delivery seriously. PRAY HARD!

At Home with Newborn Twins

What were the first few days like? Breastfeeding was a priority for me. I just concentrated on getting them to latch effectively. I also tried to pump as much as possible. We just tried to get a feel for each baby and their temperaments.

How did the pandemic change your experience? It was great that we had an excuse not to allow visitors! We could establish our breastfeeding relationship and not have to worry about covering up. I did have a postpartum doula come a couple of days but I didn’t need nearly as much help as I thought.

What were people able to do to help support you during the pandemic? The best thing was friends dropping off meals or sending funds for meals!

Tell us about your routine. I feed on demand (truly at every whimper) and let them set their own normal. Now, they’ve pretty much set their own schedule which is very similar to each other. My husband wakes and feeds Baby Bennett during the night and I feed Beckett.

How soon did the twins start to show their different personalities? A couple of weeks in, we realized Bennett was a content baby and an excellent sleeper. Beckett latched effectively almost right away and is more demanding.

How do you tell your twins apart? They look the opposite of each other. Beckett is fair-skinned, blonde hair and blue eyes. Bennett has a dark complexion with dark hair and brown eyes.

How is feeding going? At three months both began latching effectively and I started to only pump once a day, during the night! I still mostly just feed all day but I have nothing better or more important to do!

How are any older siblings adjusting? My girls LOVE the babies! They were there for their birth and took to them immediately! They help me out tremendously!

Have you had any issues with Postpartum Depression or Anxiety? Not with the twins. I’m a pretty anxious and high strung person but my most difficult postpartum time mentally was after my first.

Do you have any toys or twin gear that you love? Tell us about it! Twin Z pillow, My Twin Brest Friend pillow, Weego, Twingo, and the Lovevery subscription have all been amazing!